Breeding View uses a combination of simple interval mapping (SIM) and composite interval mapping (CIM) to identify statistically significant associations between markers and traits as well as to identify the peak positions of the linkage map associated with the traits evaluated.  This is done by testing for significant correlations at each of the marker positions as well as between markers. The SIM method is followed by CIM to increase the power of the genome-wide QTL search. CIM uses candidate QTLs identified by SIM as cofactors in the QTL scan model to control for variation caused by QTL outside the test region.

This QTL mapping case study is based on the published work of Huynh et al. 2015. The purpose of this study is to identify genetic loci associated with aphid resistance for eventual introgression into the susceptible cowpea (Vigna unguiculata)? line, CB27. See associated tutorial, Marker-Assisted Backcross Breeding for Aphid Resistance. A mapping population of recombinant inbreed line (RILs) was developed by crossing the aphid susceptible line, CB27, with an aphid resistant line, IT97K-556-6, and selfing the progeny by single seed decent for 8 generations. The genotypic and phenotypic data used in this study represent a population (N=94) of 92 RILs and the 2 parental lines, CB27 and IT97K-556-6. The population has been genotyped with 438 markers mapped to 11 linkage groups.

Three data files are needed to perform a QTL analysis:

The map file specifies the marker locations by linkage group and position (cM) within the 11 linkage groups. The genotype file contains the marker scores for each of the 92 individuals in the population. The map and genotype files are plain text files in Flapjack format. The phenotype data file contains the observations of one or more traits of each individual in the population. 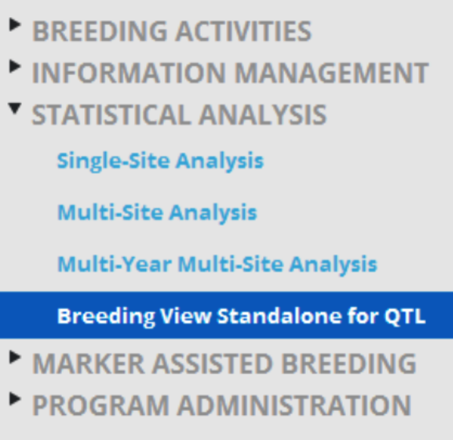 When Breeding View is launched, the Project window and Analysis Pipeline will not contain any information. 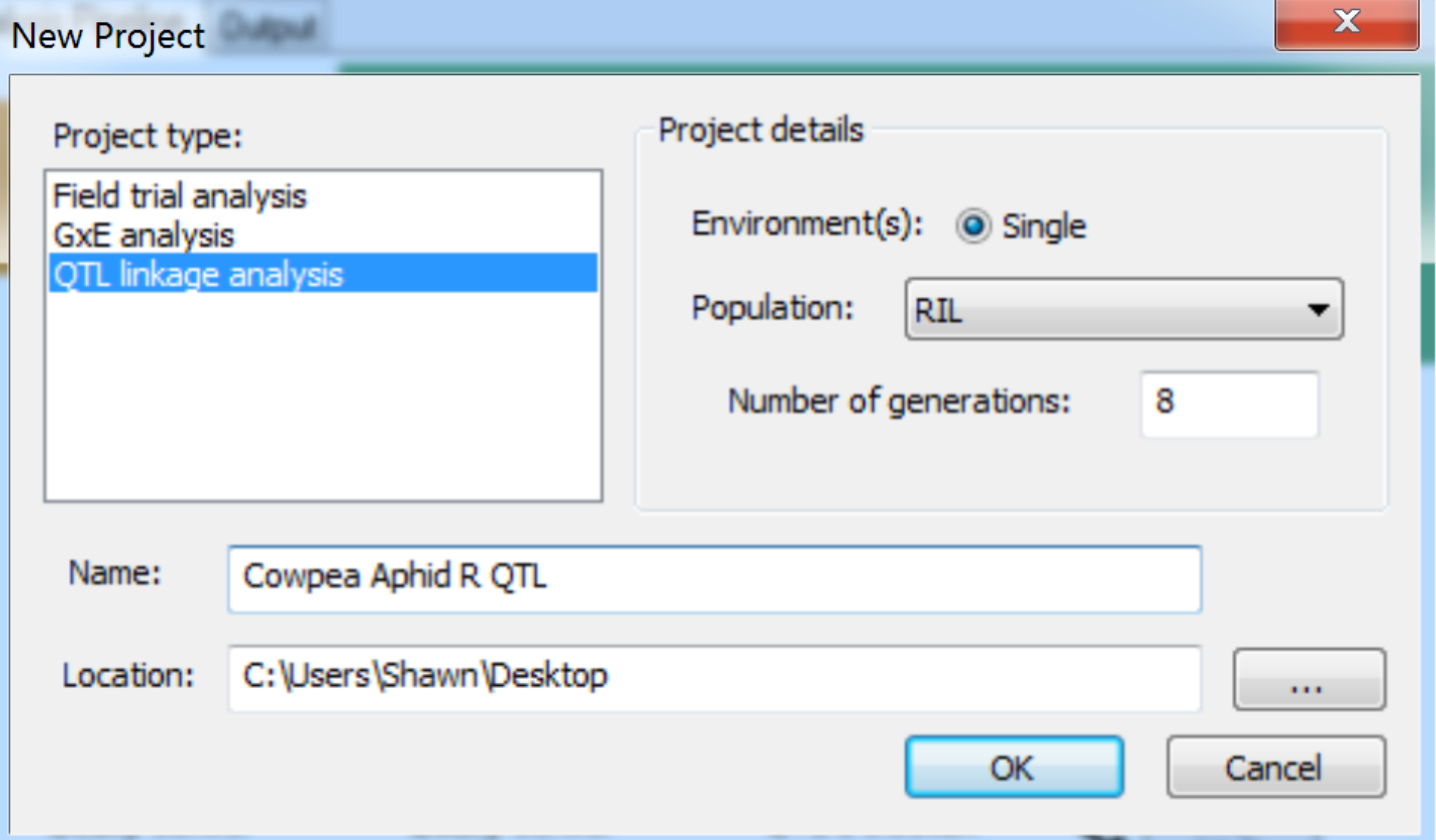 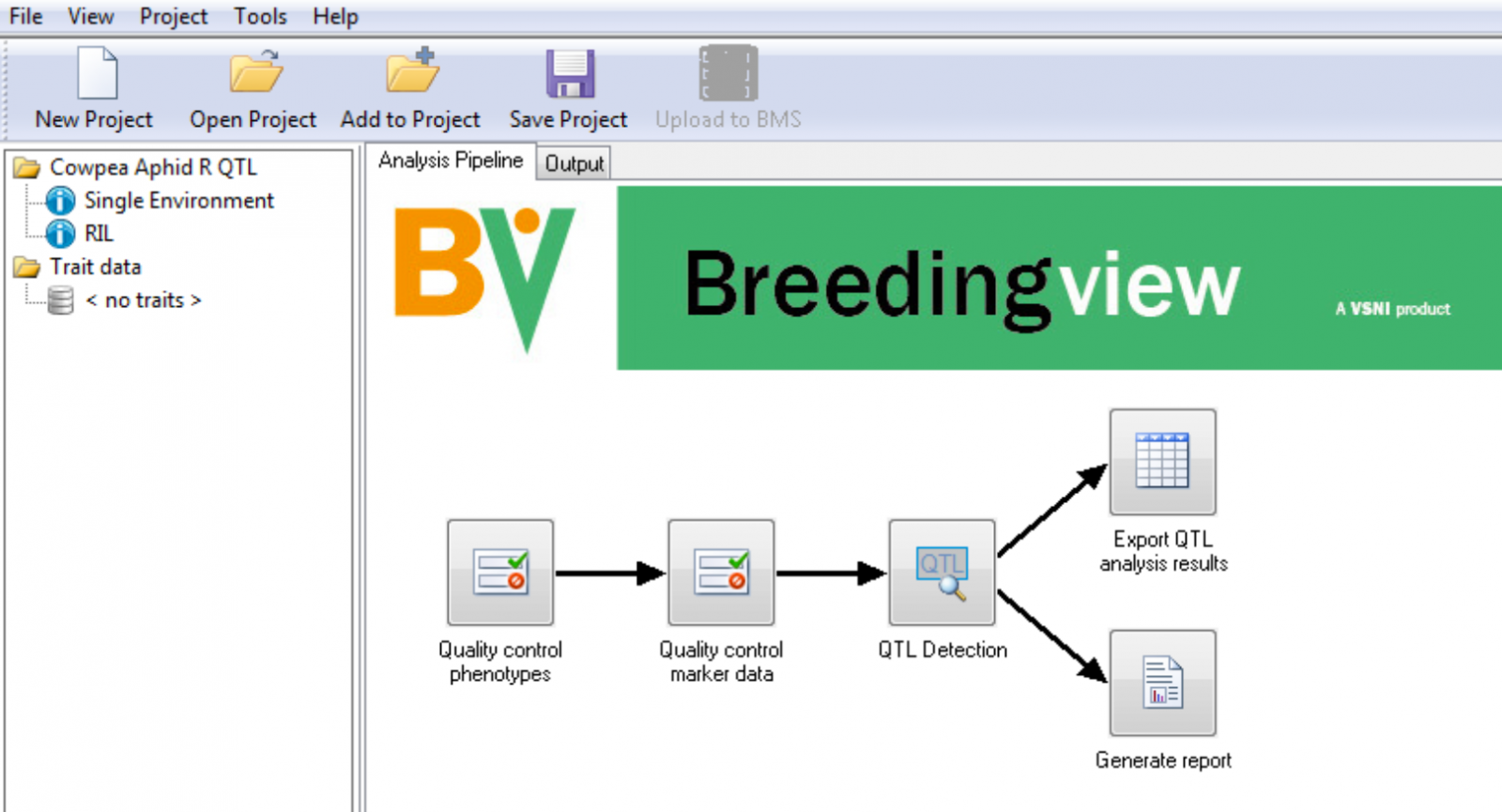 The genotypic and phenotypic data along with a map file need to be imported into the project before the analysis pipeline can be run. 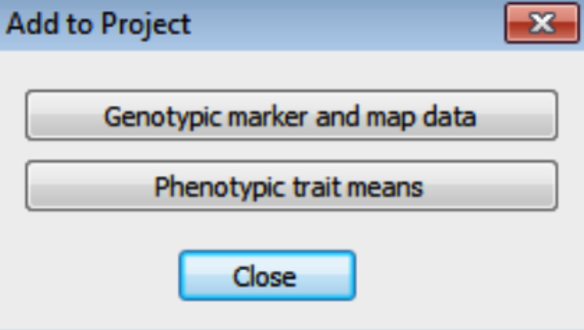 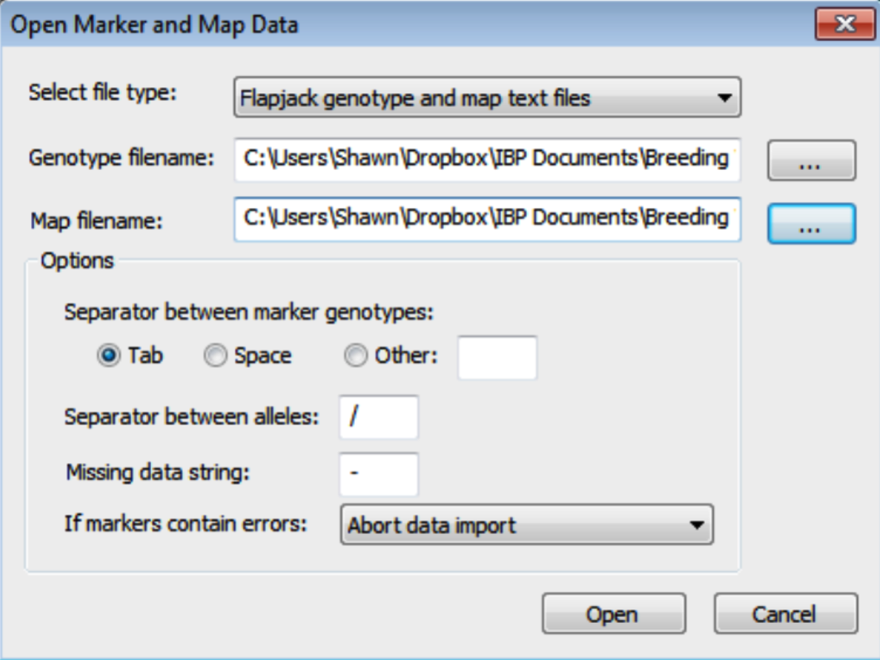 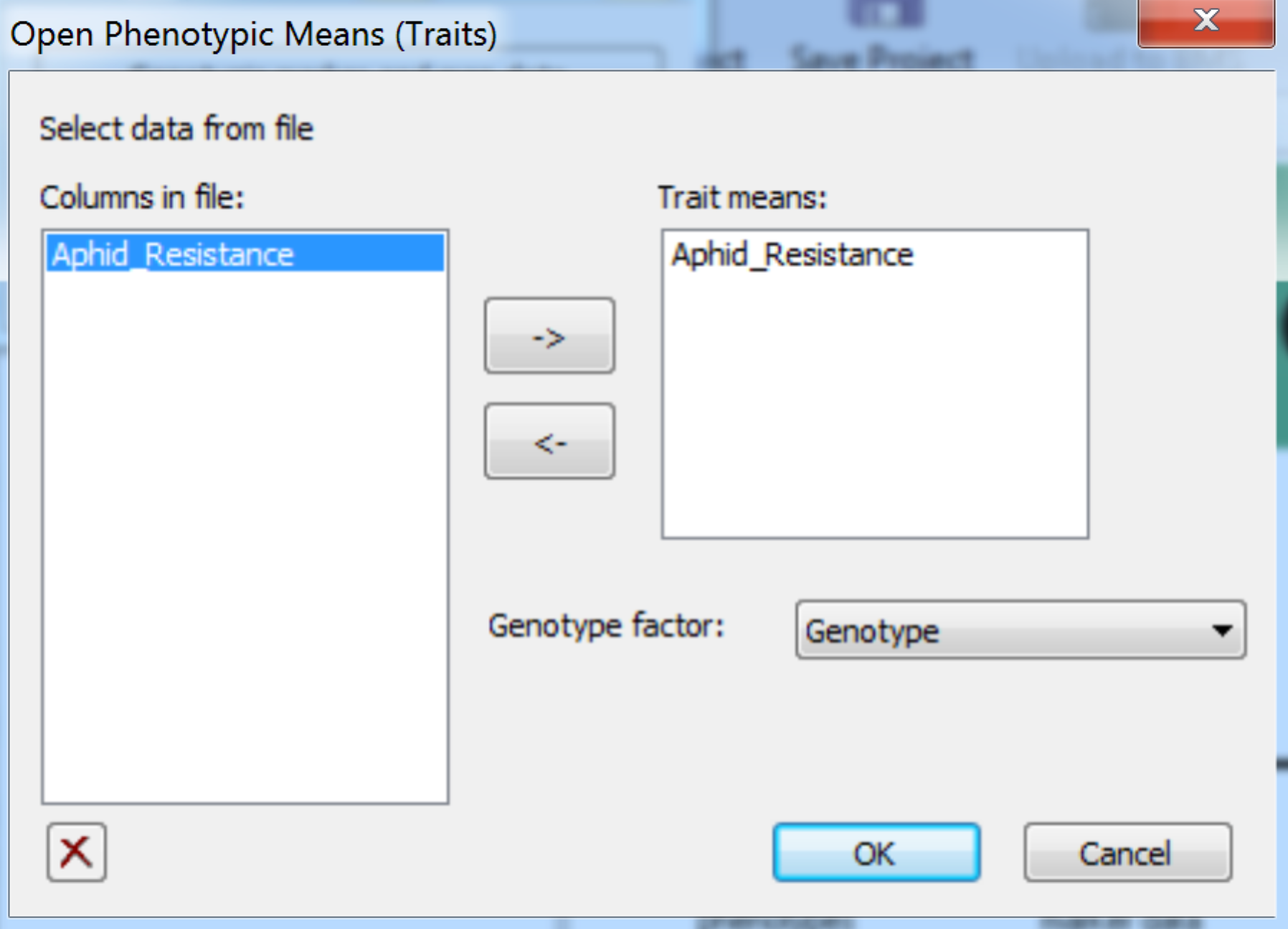 After the data have been imported, the selected traits appear within Project tab on the left side of the screen. The green check mark indicates that the Aphid_Resistance trait will be used within the analysis pipeline. 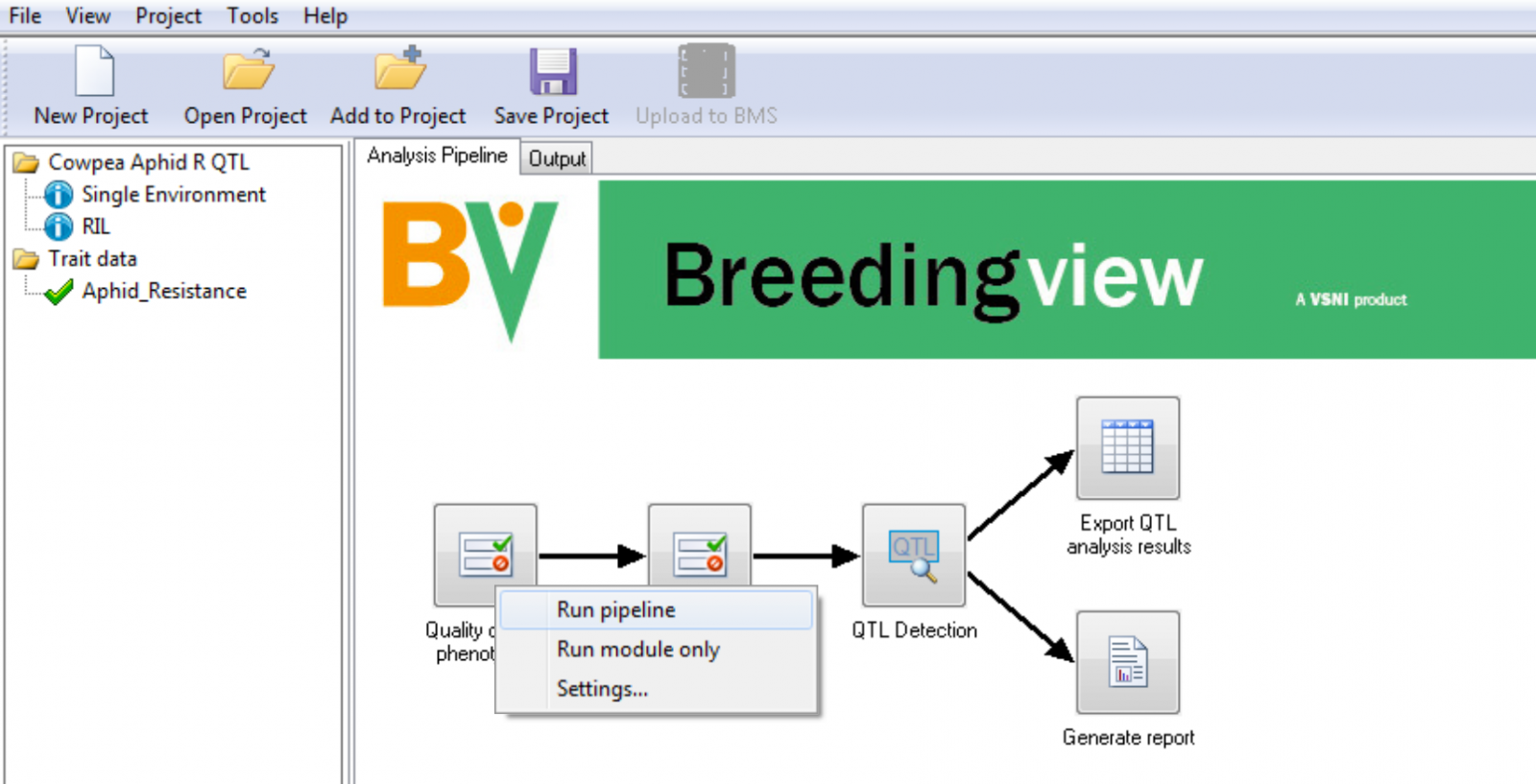 Some of the nodes have options to control the way an analysis is performed and output that is displayed. To access the options, right-click on a node and select the Settings item from the shortcut menu. The changes to the options are retained during the current session and are saved to the project file.

Settings under Quality Control Phenotypes define the phenotypic summary statistics that are displayed in the output. 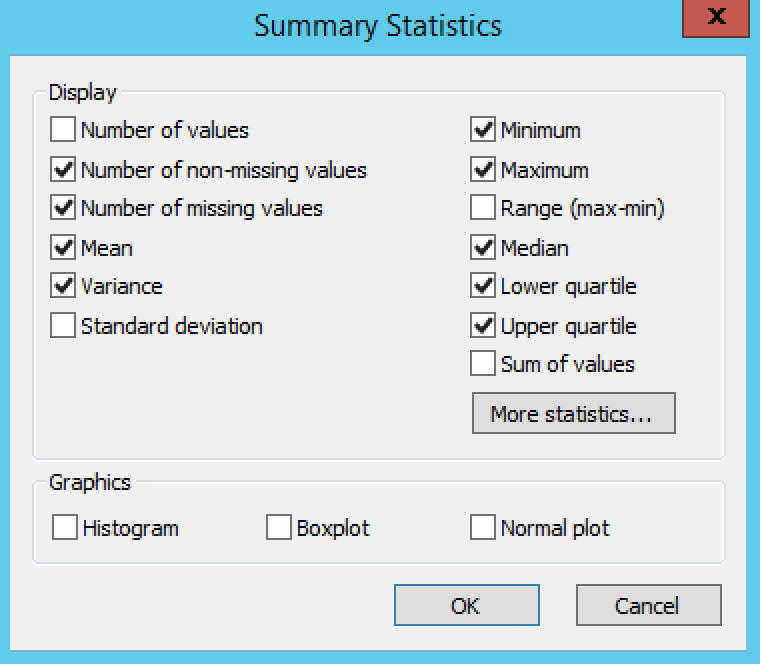 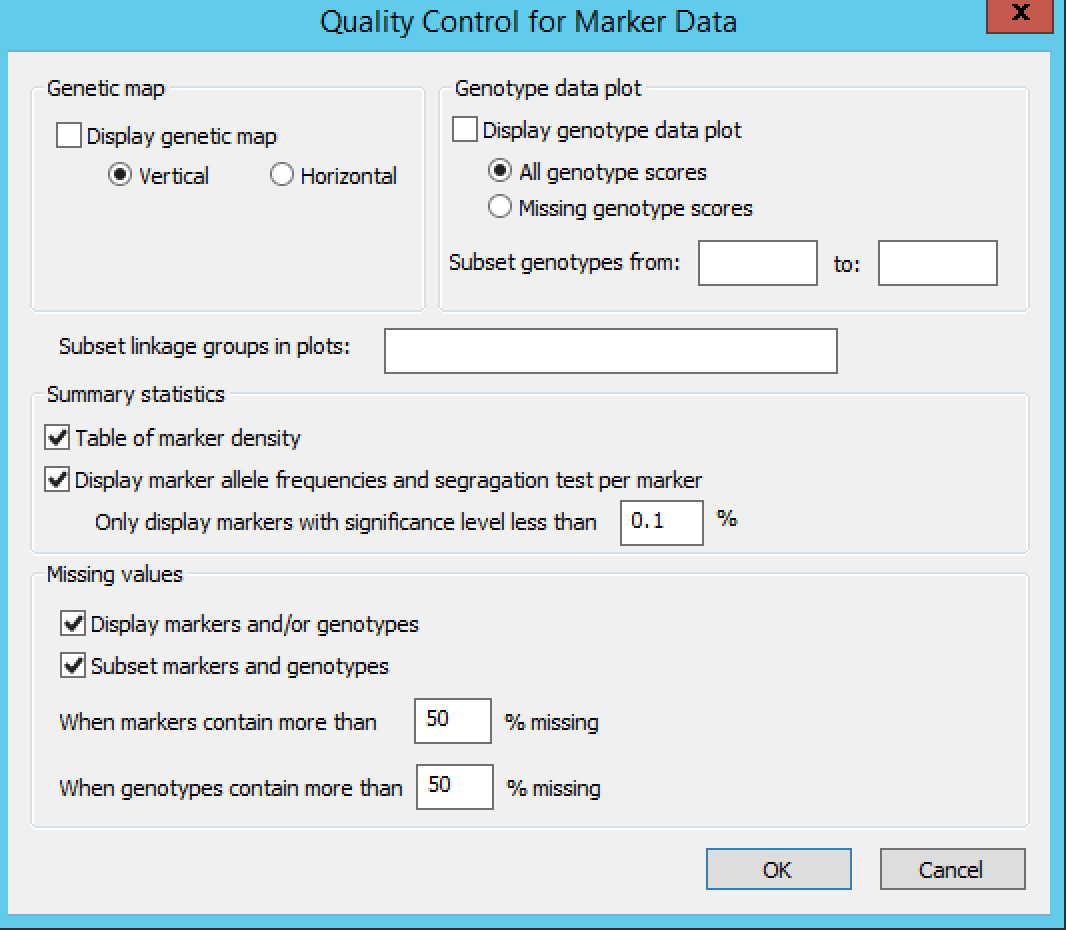 Settings under QTL Scan Options define the QTL scanning conditions. By default, Breeding View performs a single SIM followed by two rounds of CIM scanning. The number of CIM scans can be increased until the list of detected QTLs does not change. In CIM scanning, to avoid co-linearity between cofactors and tested positions, cofactors are removed temporarily from the model when testing for QTLs close to cofactor positions. The window within which cofactors are removed is set by default to 50 cM. 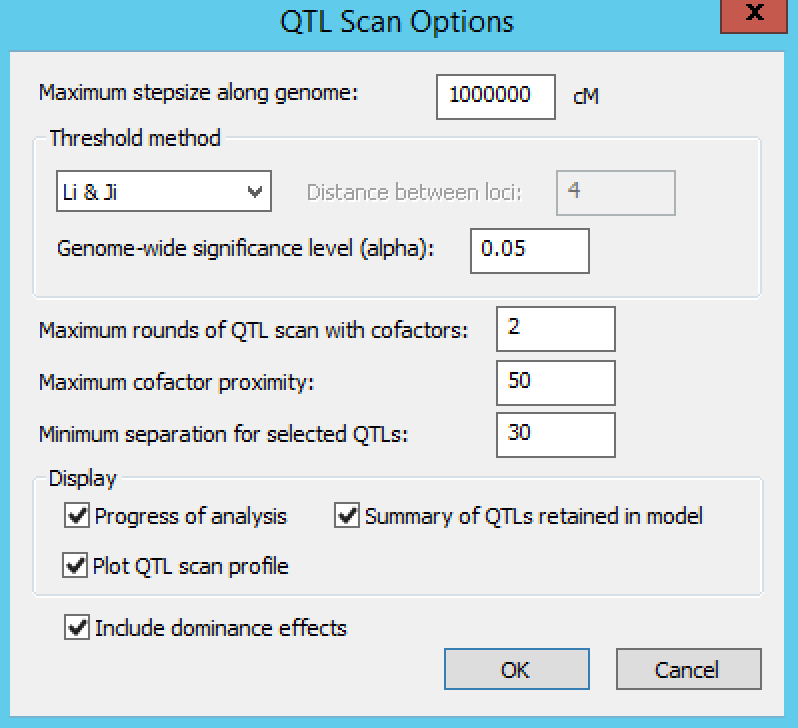 Leave the default settings for this tutorial and run the entire analysis pipeline by right clicking the first node and selecting Run the Pipeline. When the analysis completes, a prompt will appear to indicate it has finished. 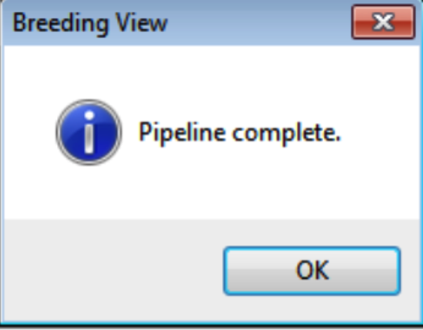 After a pipeline has been run, you can change settings and start again from any point along the pipeline. 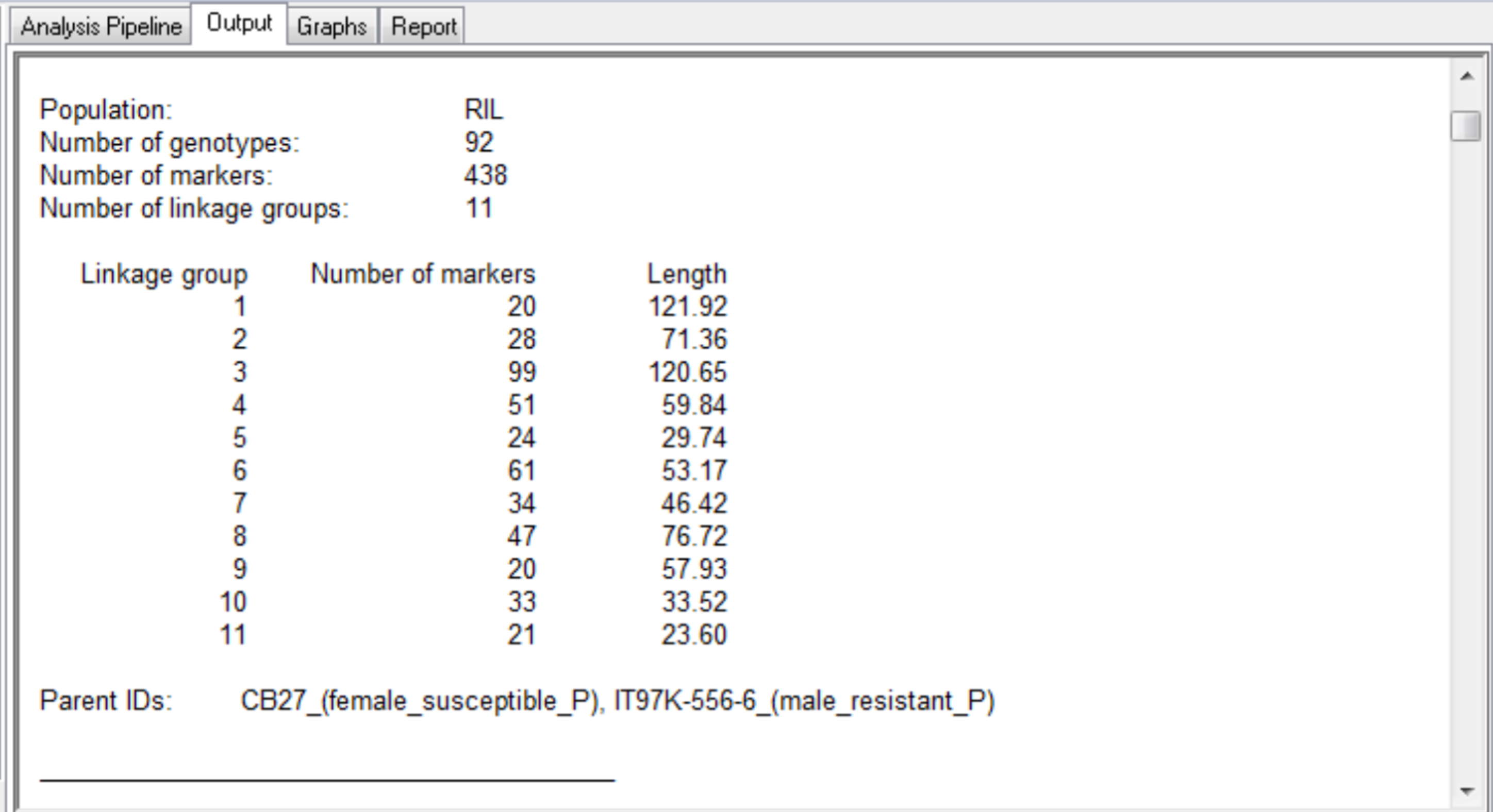 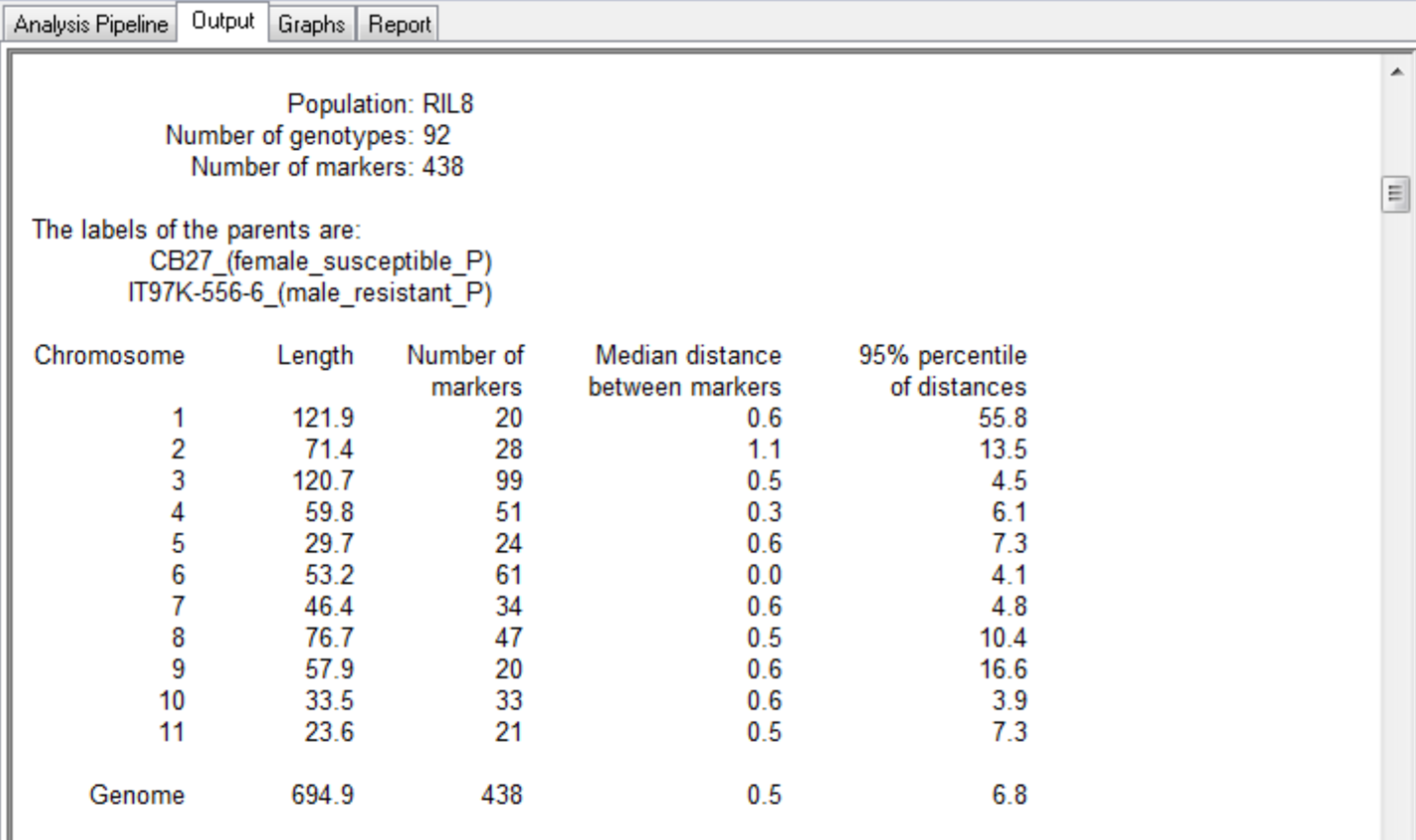 The summary for the marker data, displayed in the Output tab, provides details of the numbers of markers within each linkage group and the number of missing observations.

Output is produced for each round of SIM and CIM, with a summary of the loci greater than the detection threshold and candidate QTL.
After the last round of CIM, the effects of significant QTL are estimated. 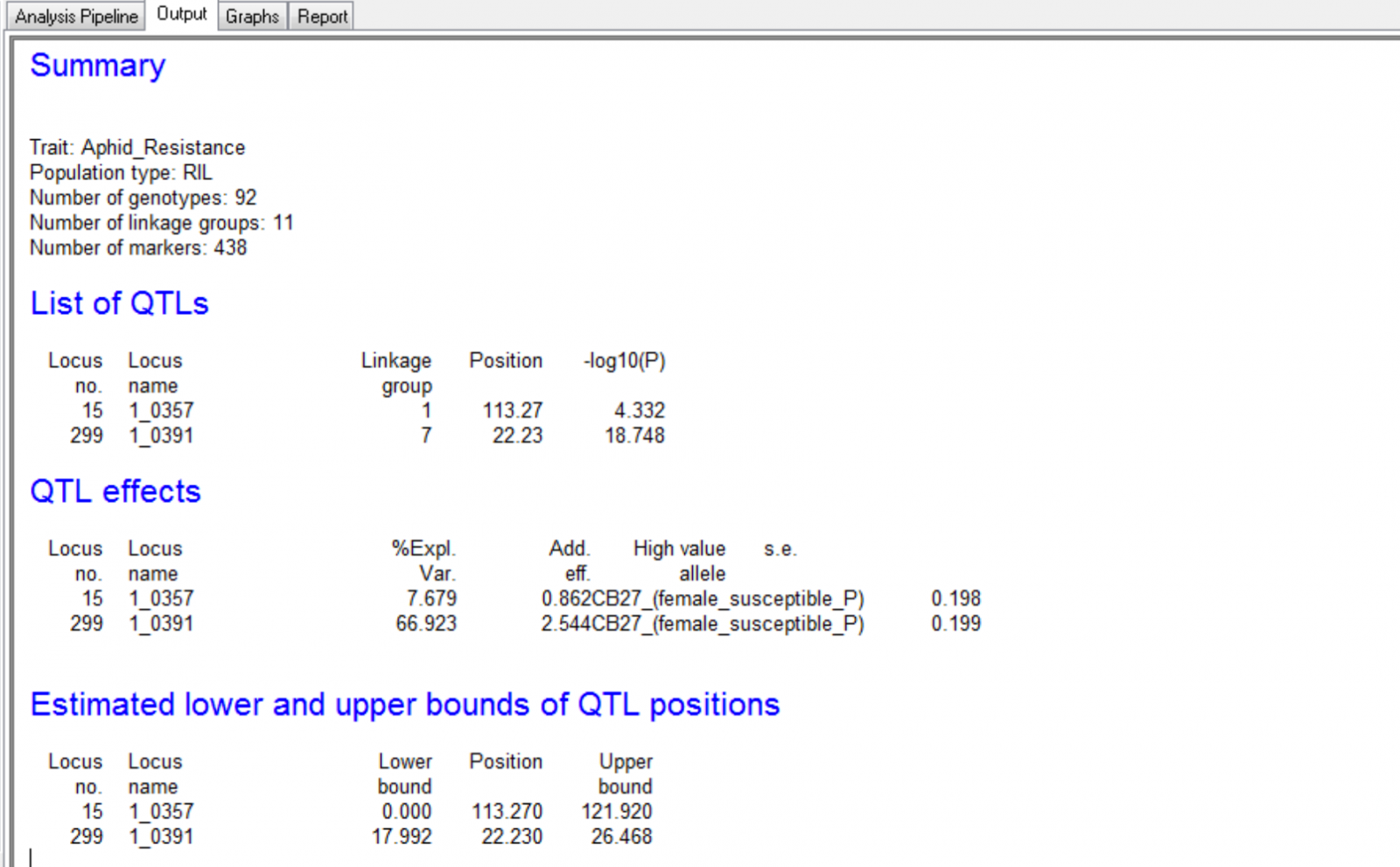 Two QTL associated with aphid resistance identified on chromosomes 1 and 7 explain 7.7 and 66.9% of the variance in aphid resistance respectively.  High phenotypic values correspond to high damage symptom score of the susceptible parent, CB27.

The QTL detection produces graphs of the scan profiles for the simple interval mapping and each round of composite interval mapping. Each graph displays the profile within each linkage group, the threshold of detection, and parental contributor of the high value allele. All figures are saved as image (.png) files within the working project folder, in a subfolder using the date and time. The phenotypic identifier will begin the file name. 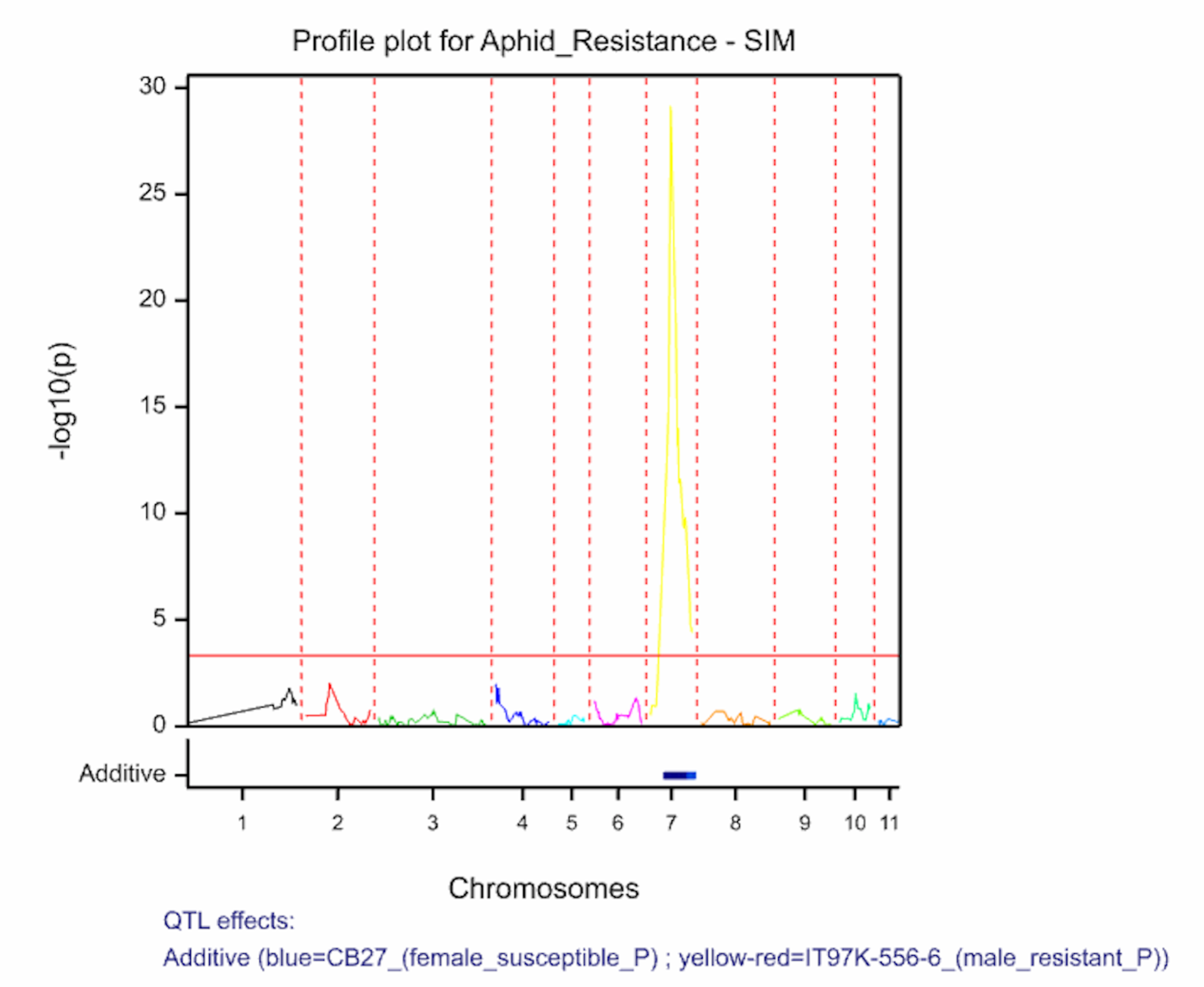 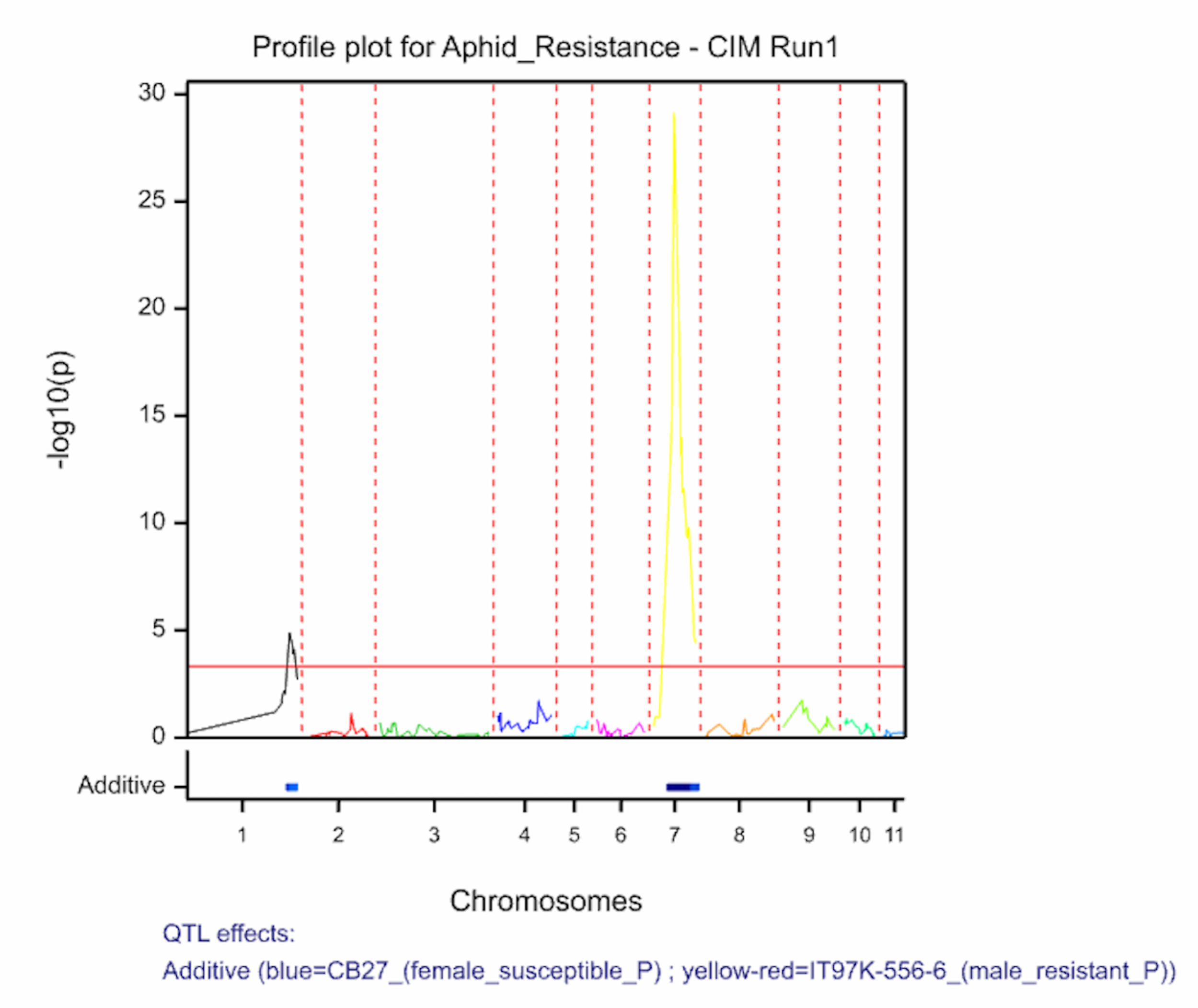 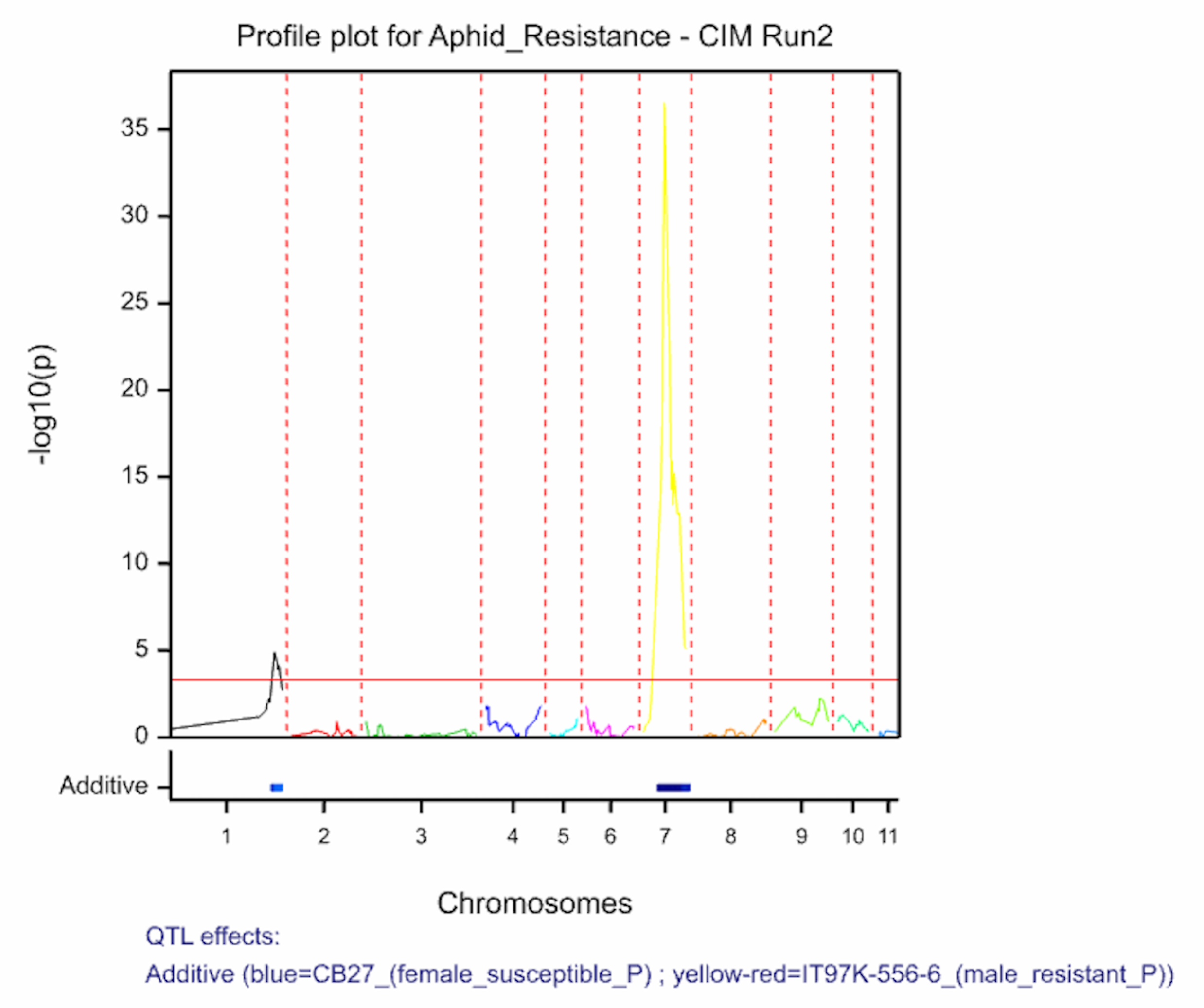 A figure where QTL are overlaid on the genetic map is automatically saved an image (.png) file to the working directory when the pipeline is run. 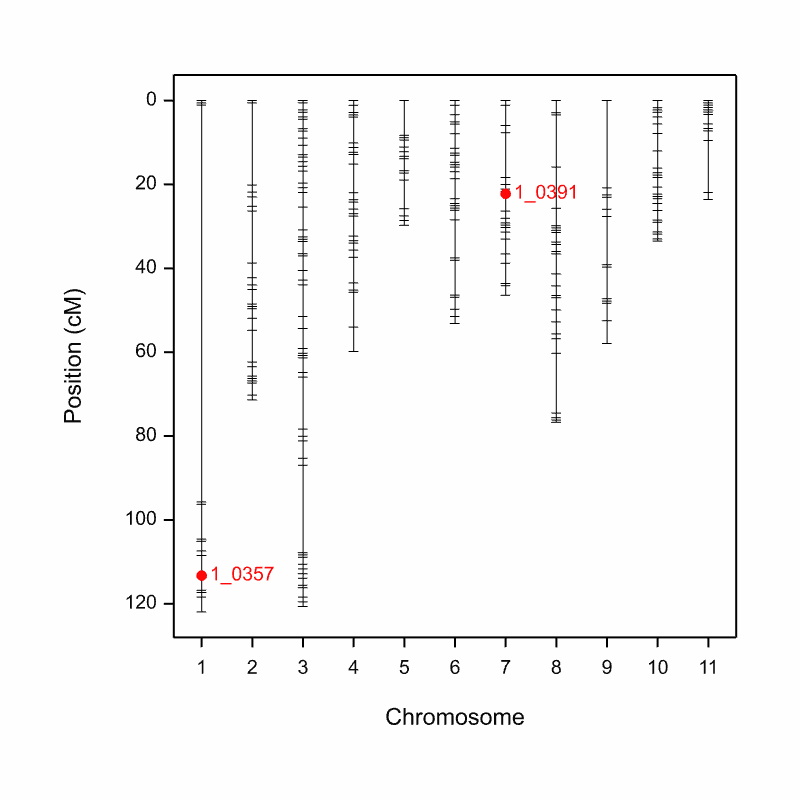 The final results are collated and displayed in the Report tab within an HTML document. The HTML report (Report.htm) is automatically saved within the working project folder, in a subfolder using the date and time. 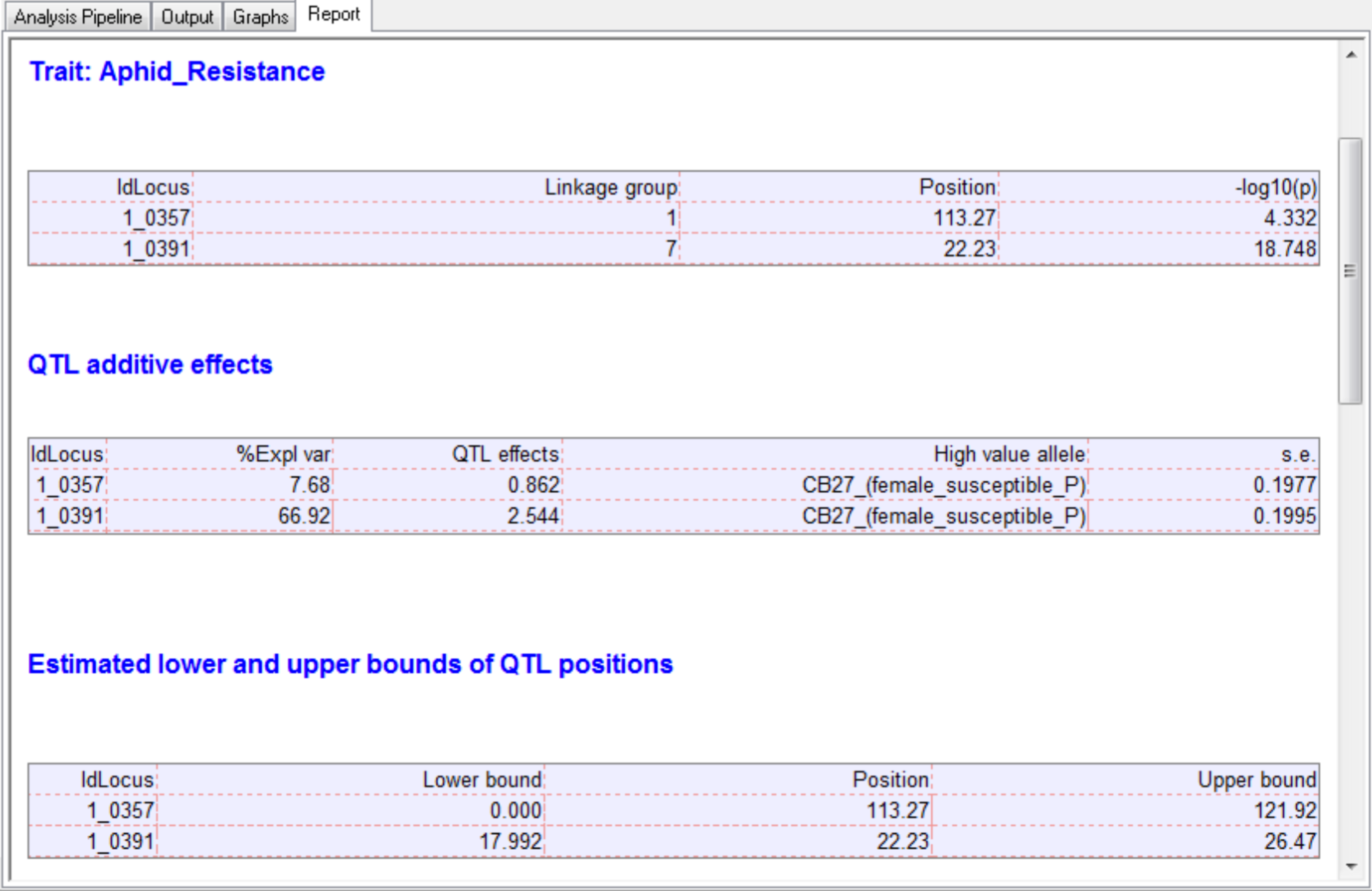 When the QTL analysis pipeline is complete, Flapjack (Milne et al., 2010) automatically opens a graphical genotype display. The Flapjack project file is saved in a file within the working project folder in a subfolder using the date and time of the run. The file is automatically named Aphid_Resistance.flapjack. You may be asked to update your version of Flapjack before proceeding.

QTL are now visible on their respective chromosomes.

QTL associated with aphid reistance on chromosome 7 at 22.23 cM

The Integrated Breeding Platform (IBP) is jointly funded by: the Bill and Melinda Gates Foundation, the European Commission, United Kingdom's Department for International Development, CGIAR, the Swiss Agency for Development and Cooperation, and the CGIAR Fund Council. Coordinated by the Generation Challenge Program the Integrated Breeding Platform represents a diverse group of partners; including CGIAR Centers, national agricultural research institutes, and universities.

The statistical algorithms in the Breeding View were developed by VSN International Ltd in collaboration with the Biometris group at University of Wageningen. Cowpea QTL demonstration data were provided by Tim Close, Philip Roberts, Bao Lam Huyuh at the University of California Riverside. These data may have been adapted for training purposes. Any misrepresentation of the raw breeding data is the solely the responsibility of the IBP.

This work is licensed under a Creative Commons Attribution-ShareAlike 4.0 International License.