Shawn Yarnes a, Darren Murray b, Roger Payne b & Zhengzheng Zhang b
?a The Integrated Breeding Platform, b VSN International Ltd

This tutorial provides instruction on the analysis of genotype by environment (GxE) interactions within a three-location cowpea field trial.  This tutorial builds upon the adjusted means calculated for the individual locations in the previous tutorial, Single Site Analysis: 3 Location Batch.

Screenshots and activities in this tutorial build upon work preformed in previous tutorials.

After single site analysis has been preformed for each trial location and the adjusted means are saved to the database, a multi-site analysis is possible to further investigate genotypic and environmental (GxE) interactions. 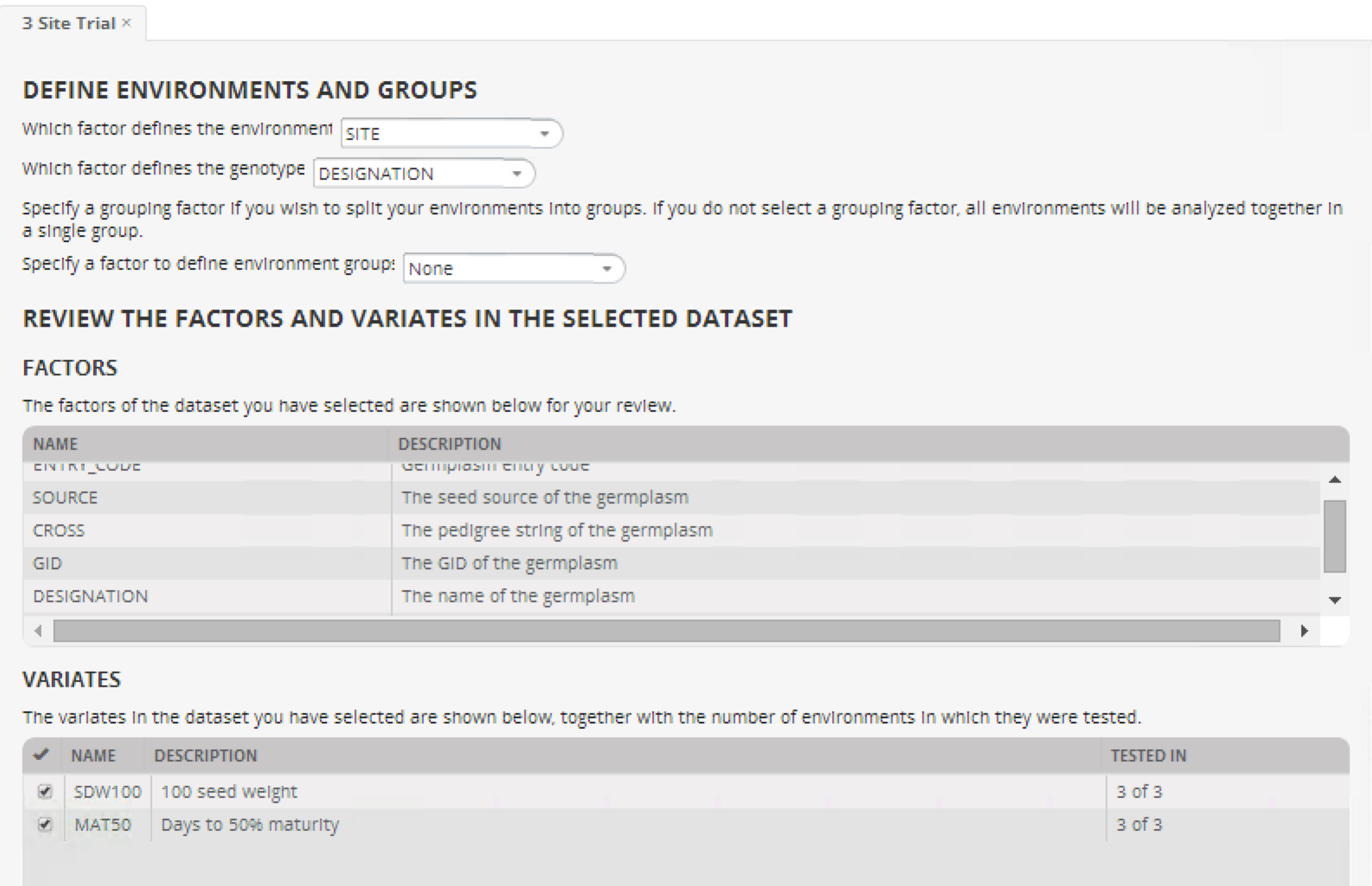 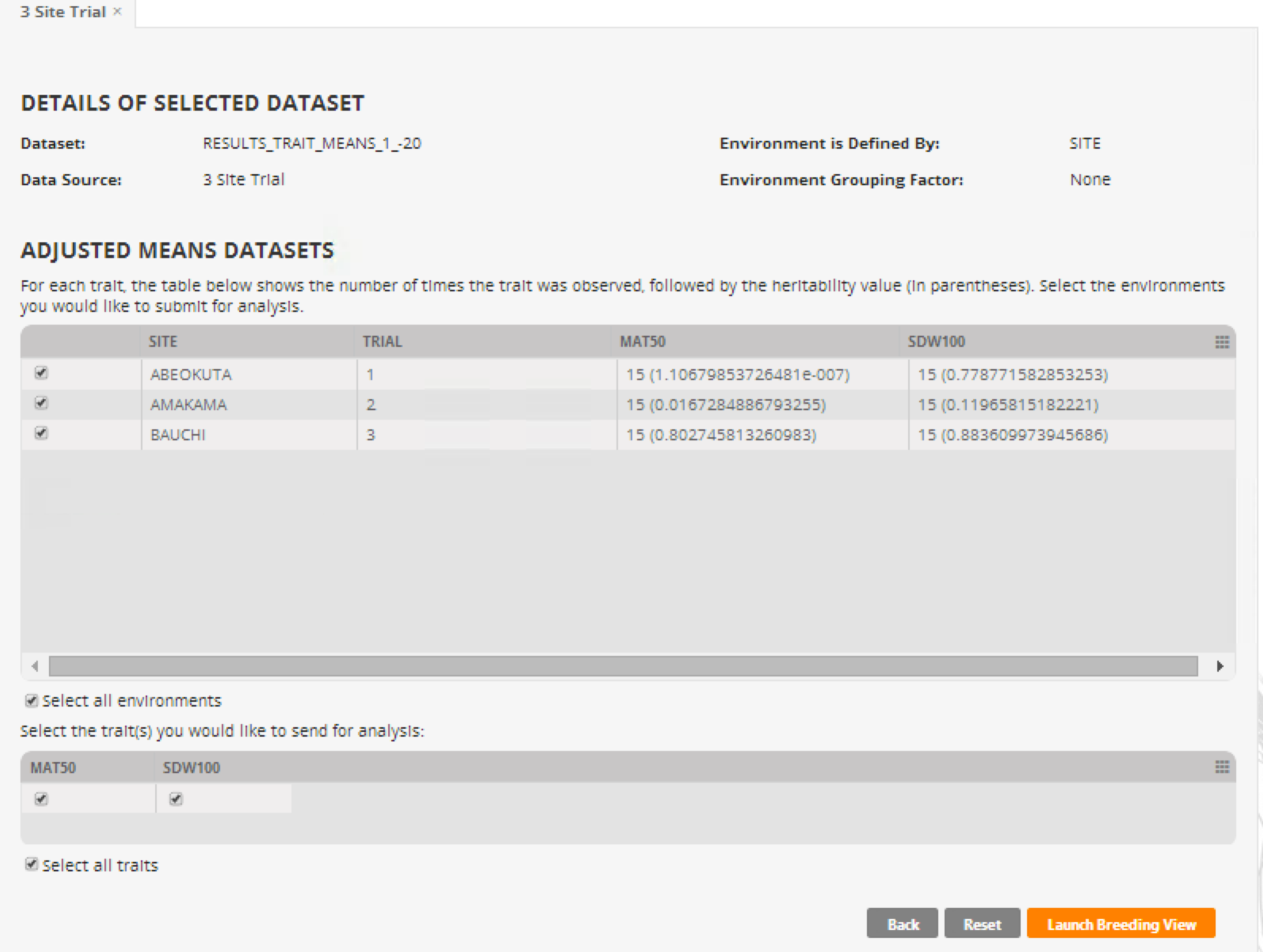 Mulit-Site analysis is database integrated.  When the Breeding View application launches, the analysis conditions and data are automatically loaded. Notice that all locations and traits are selected by default. Right click on any trait or location to deselect from the analysis. When a project has been created or opened, a visual representation of the analytical pipeline is displayed in the Analysis Pipeline tab. The analysis pipeline includes a set of connected nodes, which can be used to run and configure pipelines. 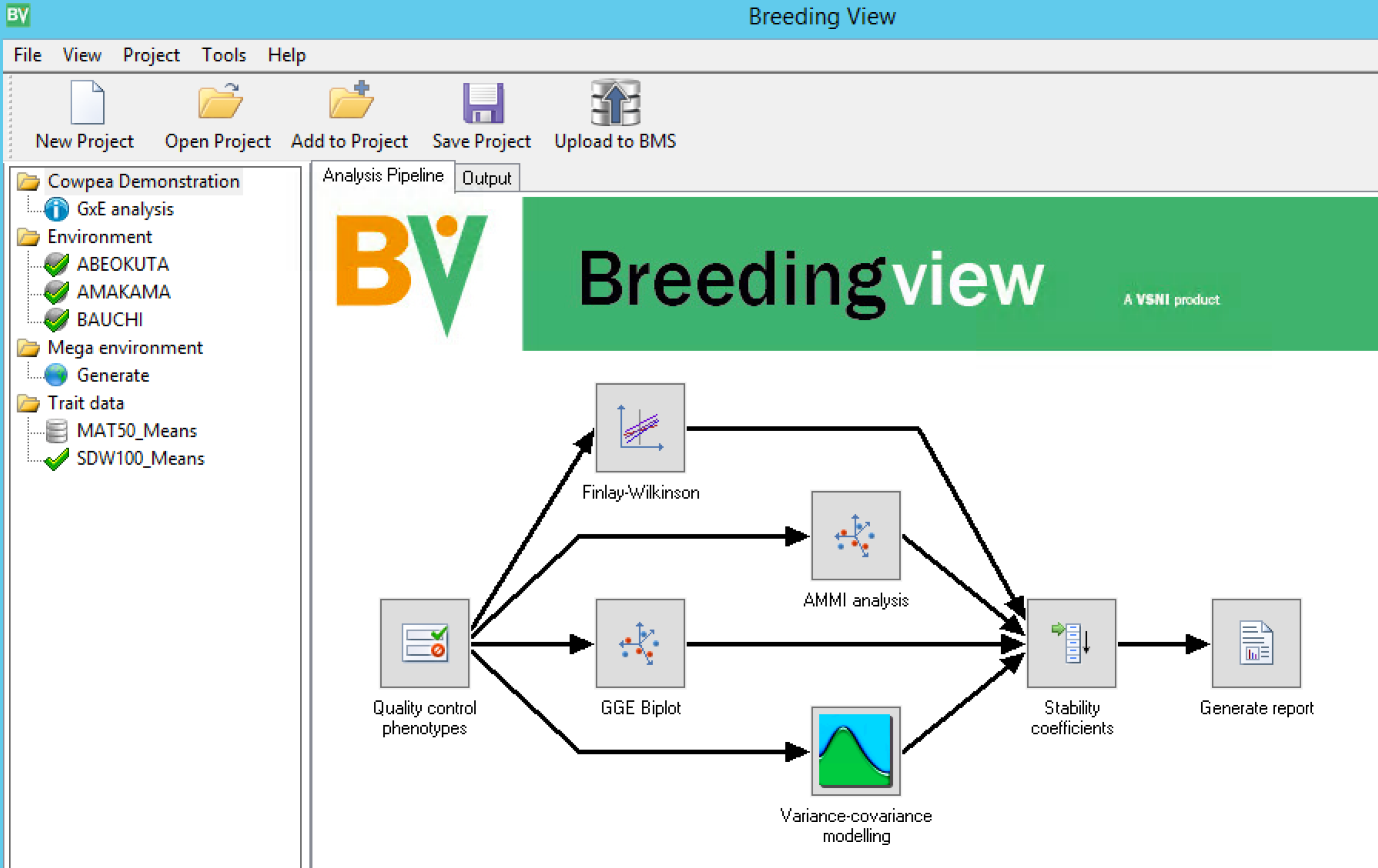 Some of the nodes have options to control they way an analysis is performed and output that is displayed. To access the options, right-click on a node and select the Settings item from the shortcut menu. Changes to the options are retained during the current session and are saved to the project file. 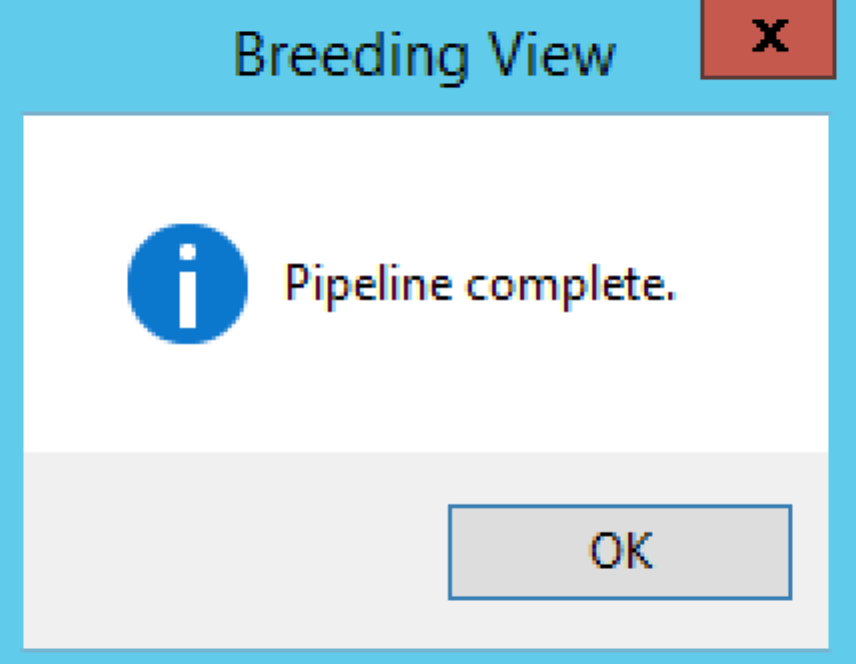 Analysis results can be found in the Output, Graphs, and Results tab. Results are also saved in the Breeding Management System’s workspace folder. 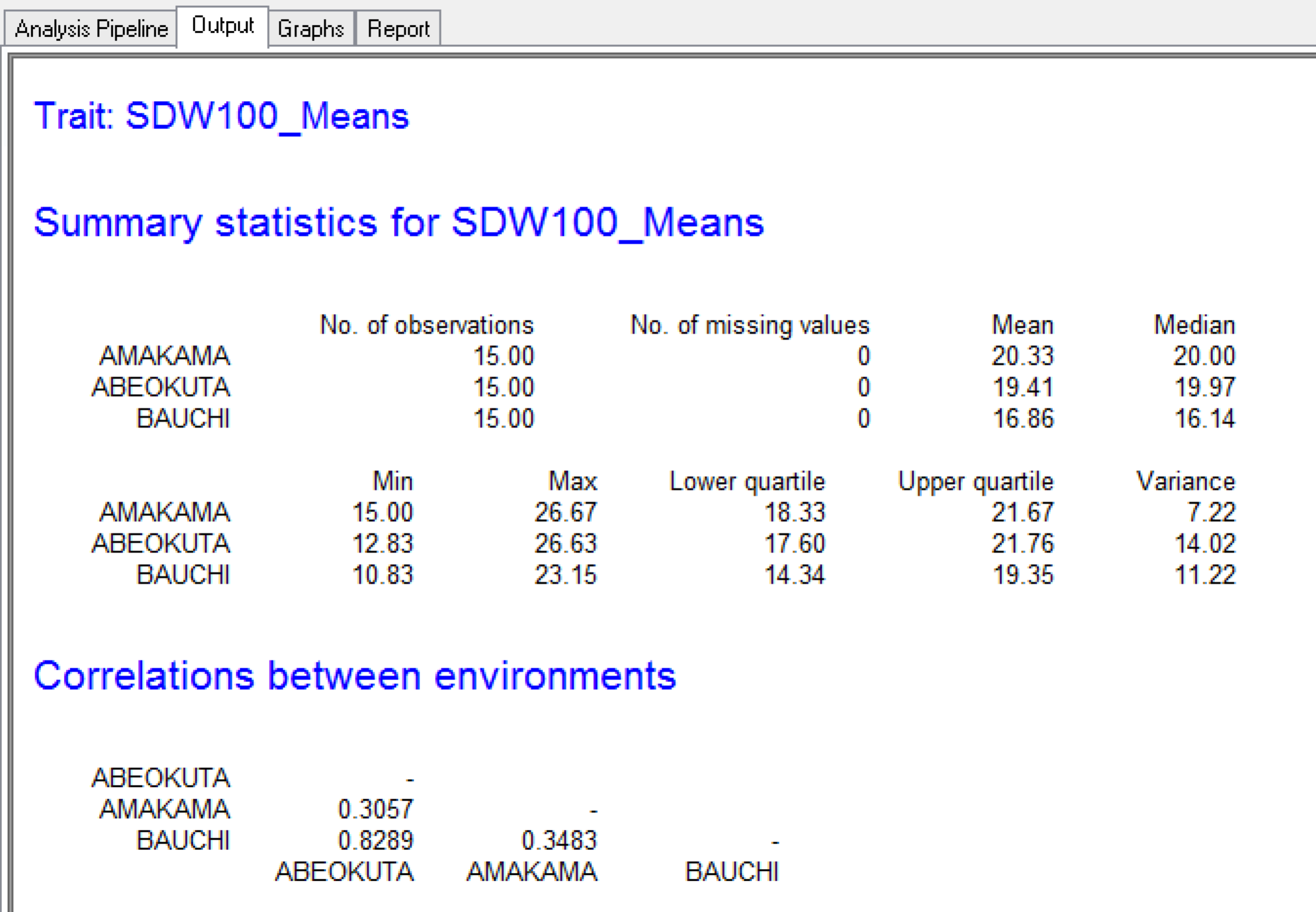 Summary statistics from the Output tab showing that the Amakama site has the highest mean seed weight and that the Abeokuta and Bauchi sites are highly correlated. 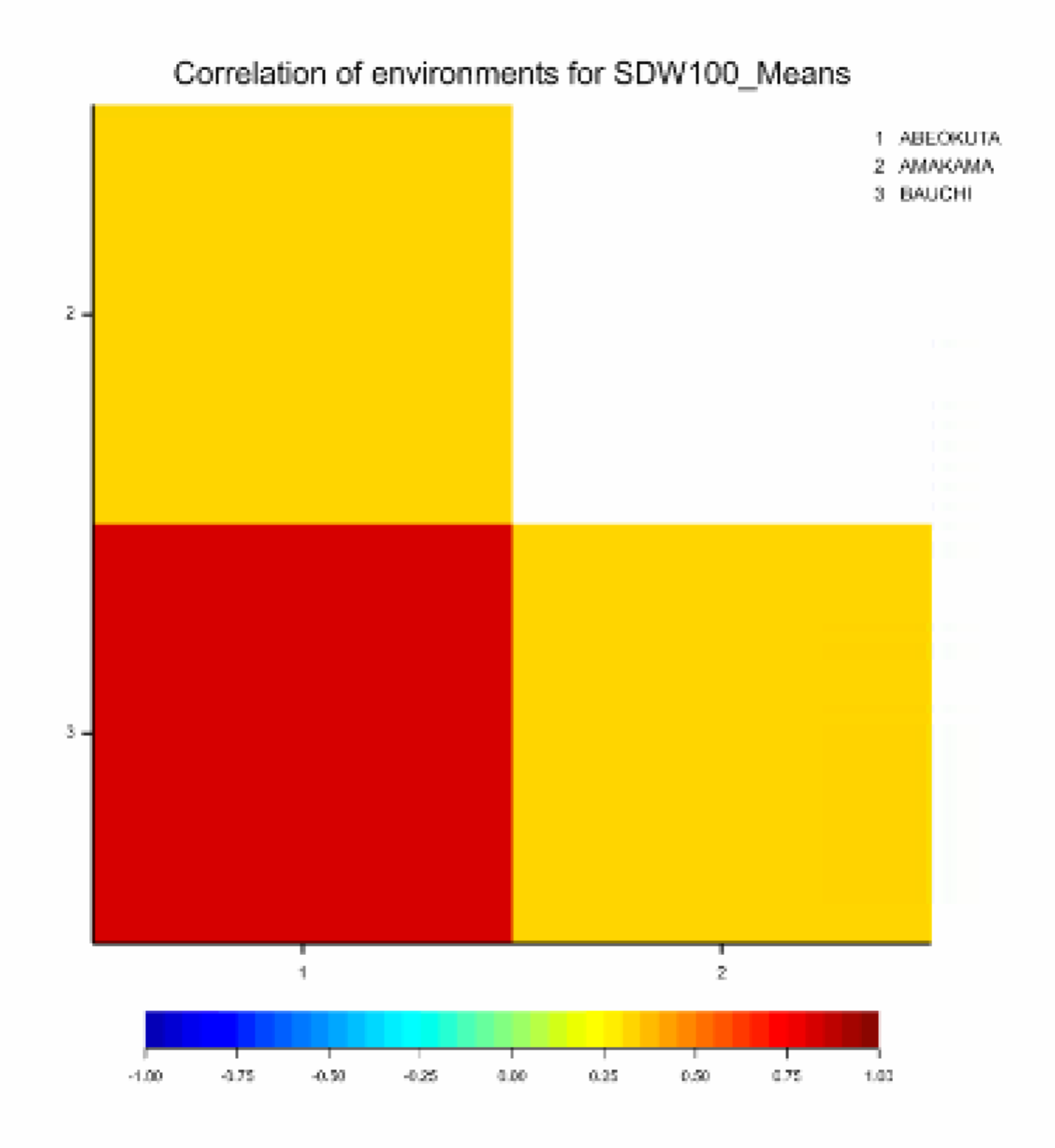 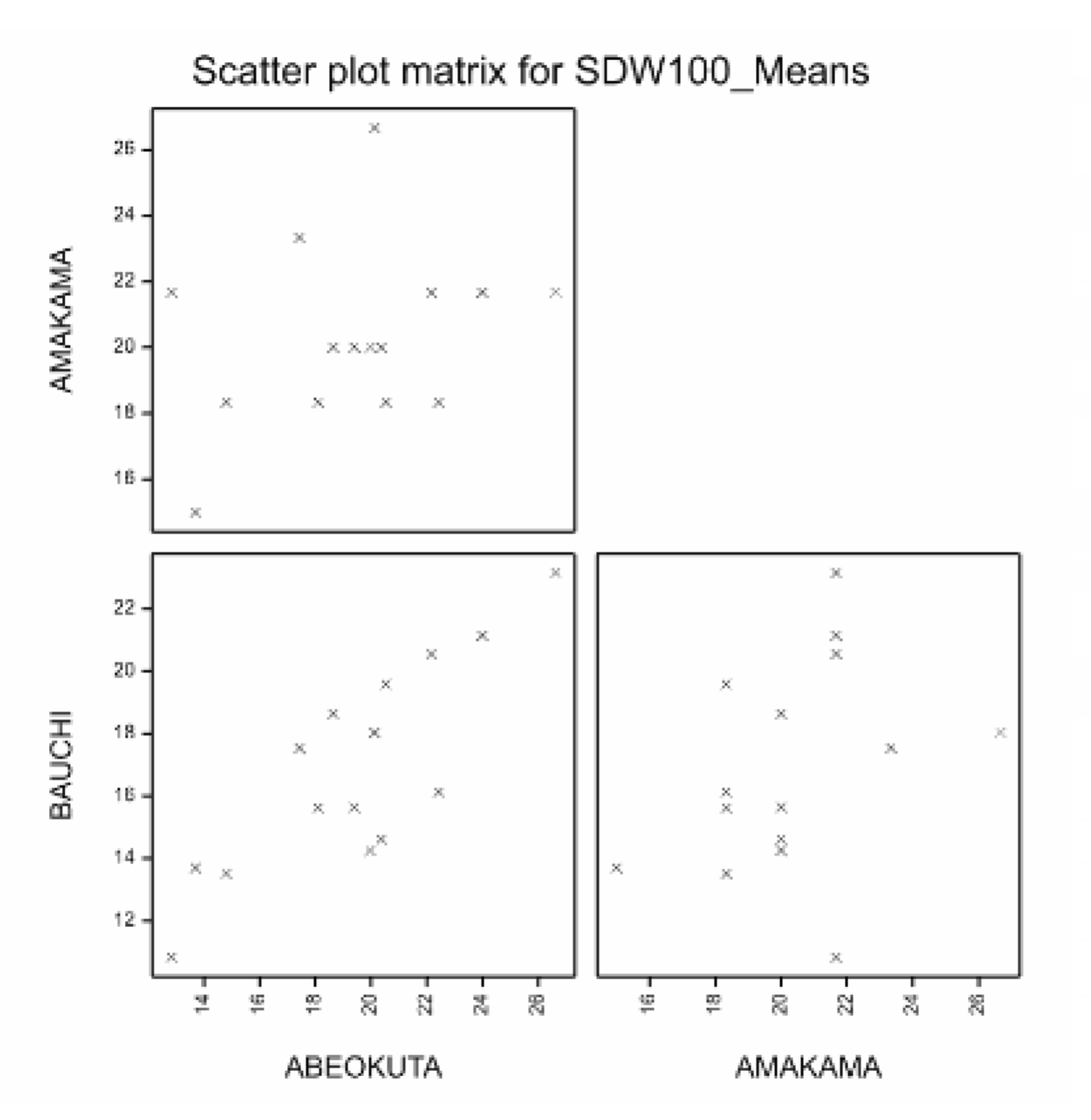 Graphical display of environmental correlations: The red coloration on the heat map indicates a high correlation (0.8289 from table in Output) between Abeokuta and Bauchi, and small correlations for the other two sites. 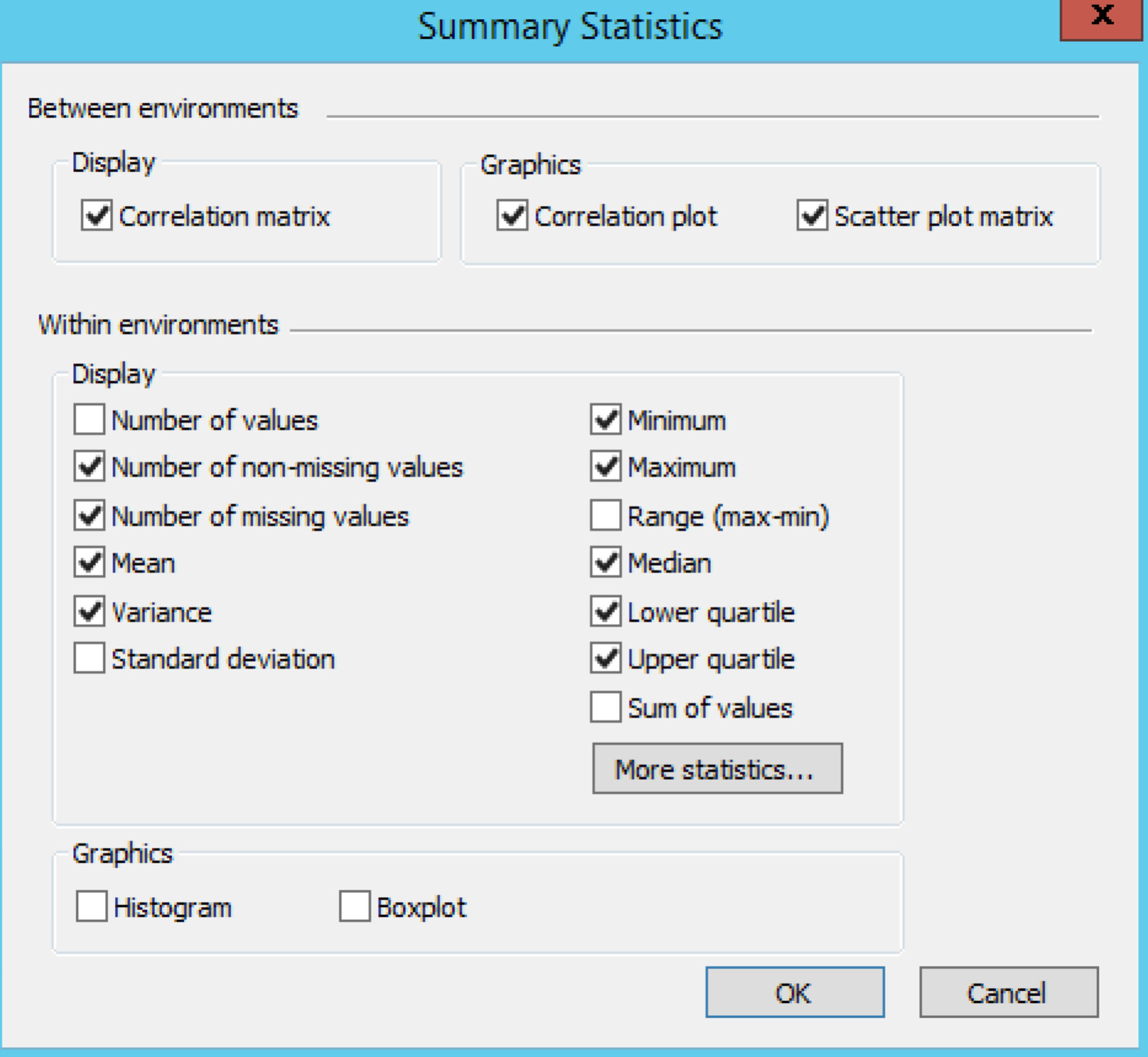 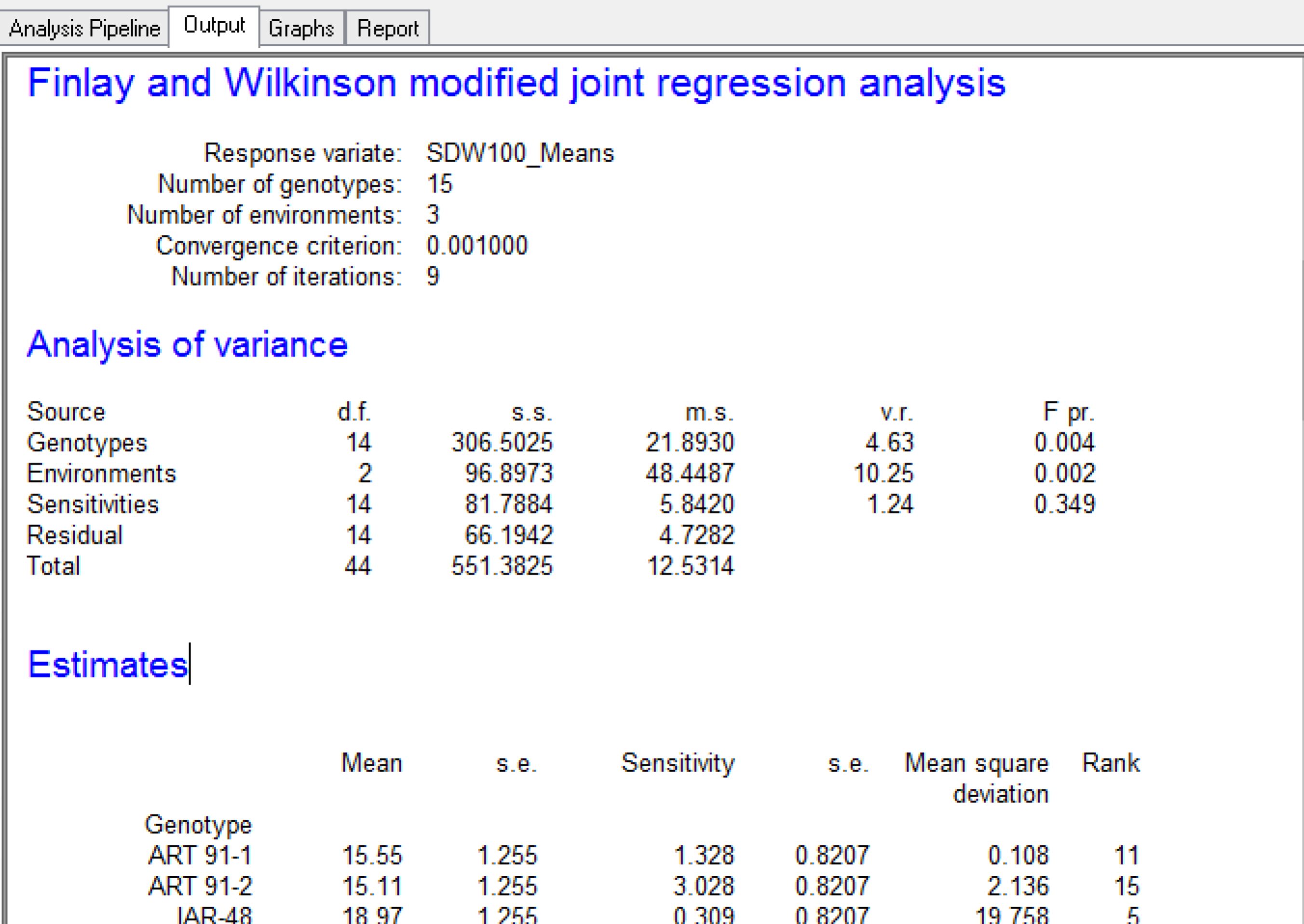 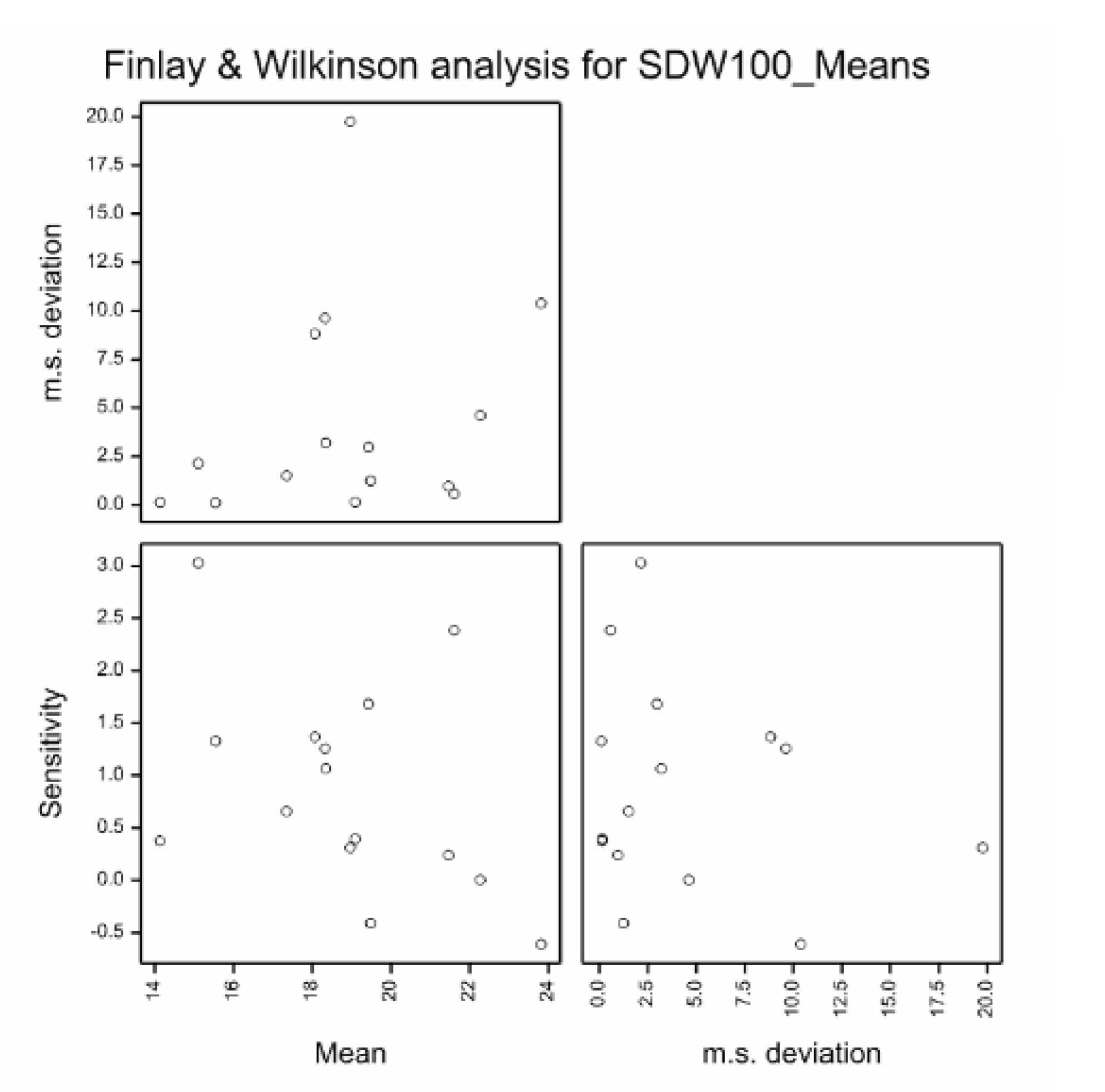 The Finlay Wilkinson analysis indicates that genotypes and environments are significant sources of variation (p = 0.004 and 0.002 respectively), but that G x E sensitivity is not significant (p=0.349). The most sensitive genotype is ART 91-2. 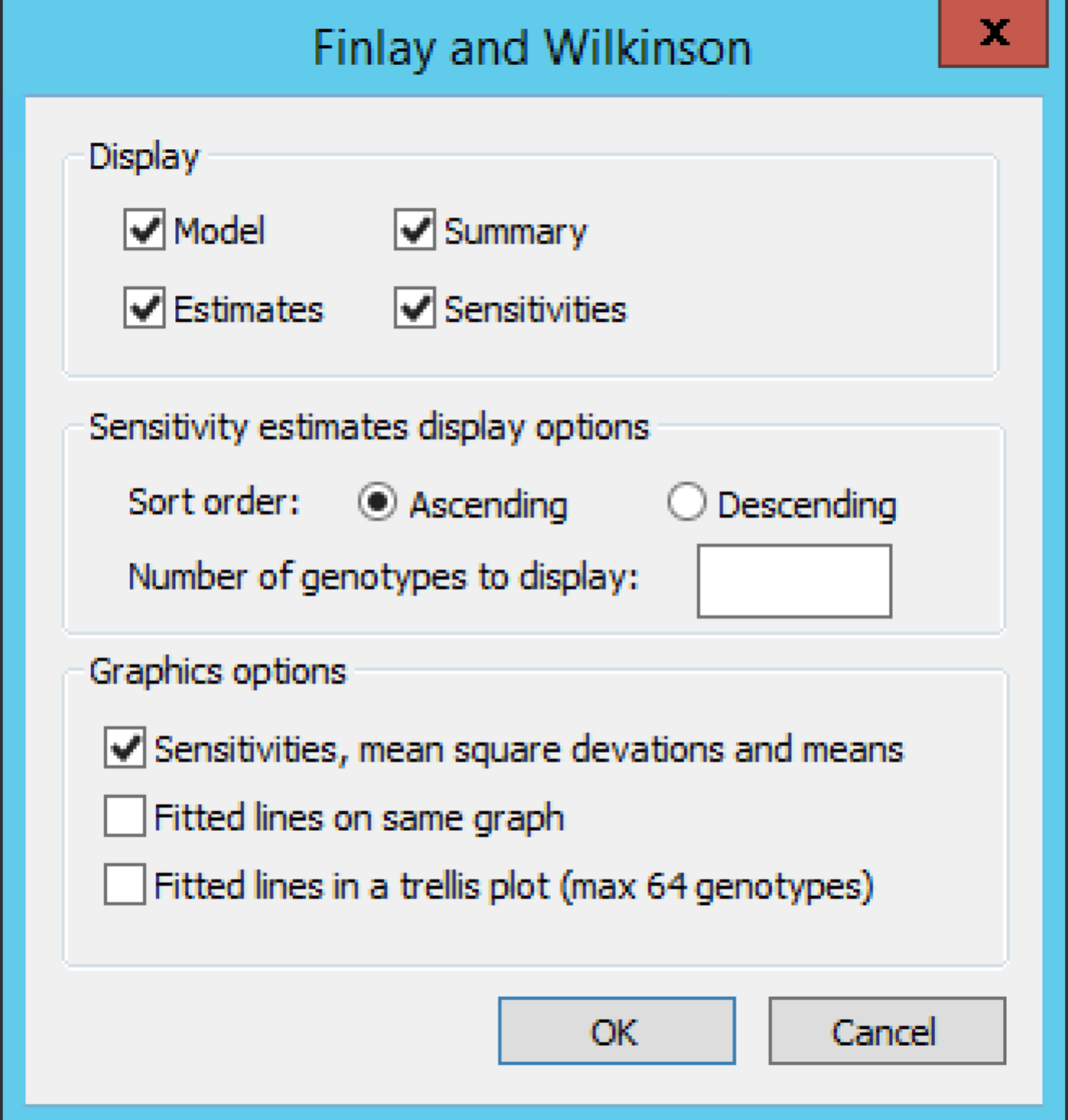 The AMMI analysis node fits a model which involves the Additive Main effects of ANOVA with the Multiplicative Interaction effects of principal components analysis (PCA). The AMMI model is more flexible than Finlay-Wilkinson, in that more than one environmental quality variable is explained using multiplicative terms.

The ANOVA table for the AMMI analysis cannot be completed with variance and P values, because degrees freedom is limited by too few environments. 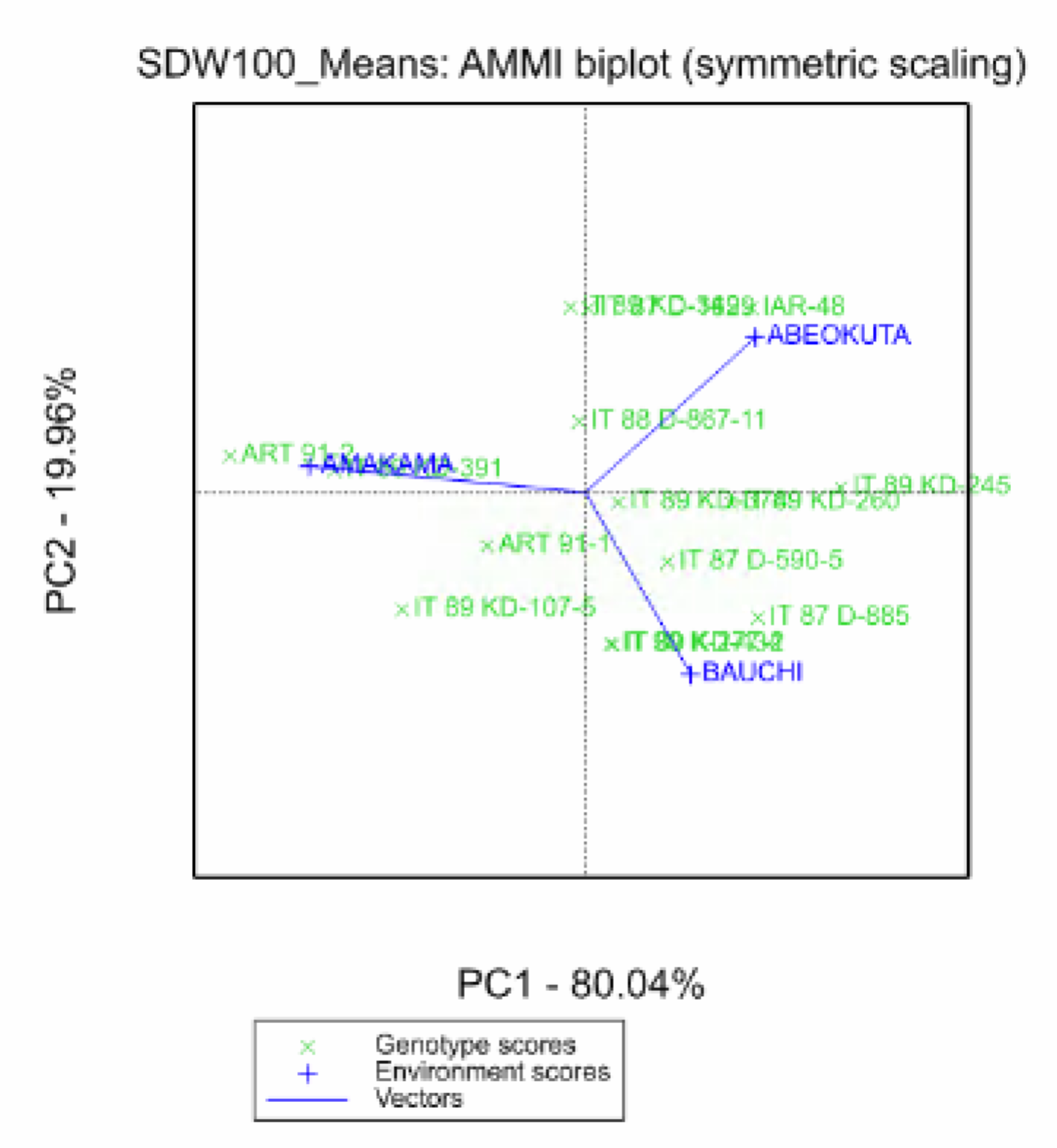 The obtuse angle between Amakama and both Bauchi and Abeokuta, indicate that Amakama is negatively correlated to the other two environments. The acute angle between Abeokuta and Bauchi  reiterates the summary statistics result, that phenotypic responses at these two locations are correlated. 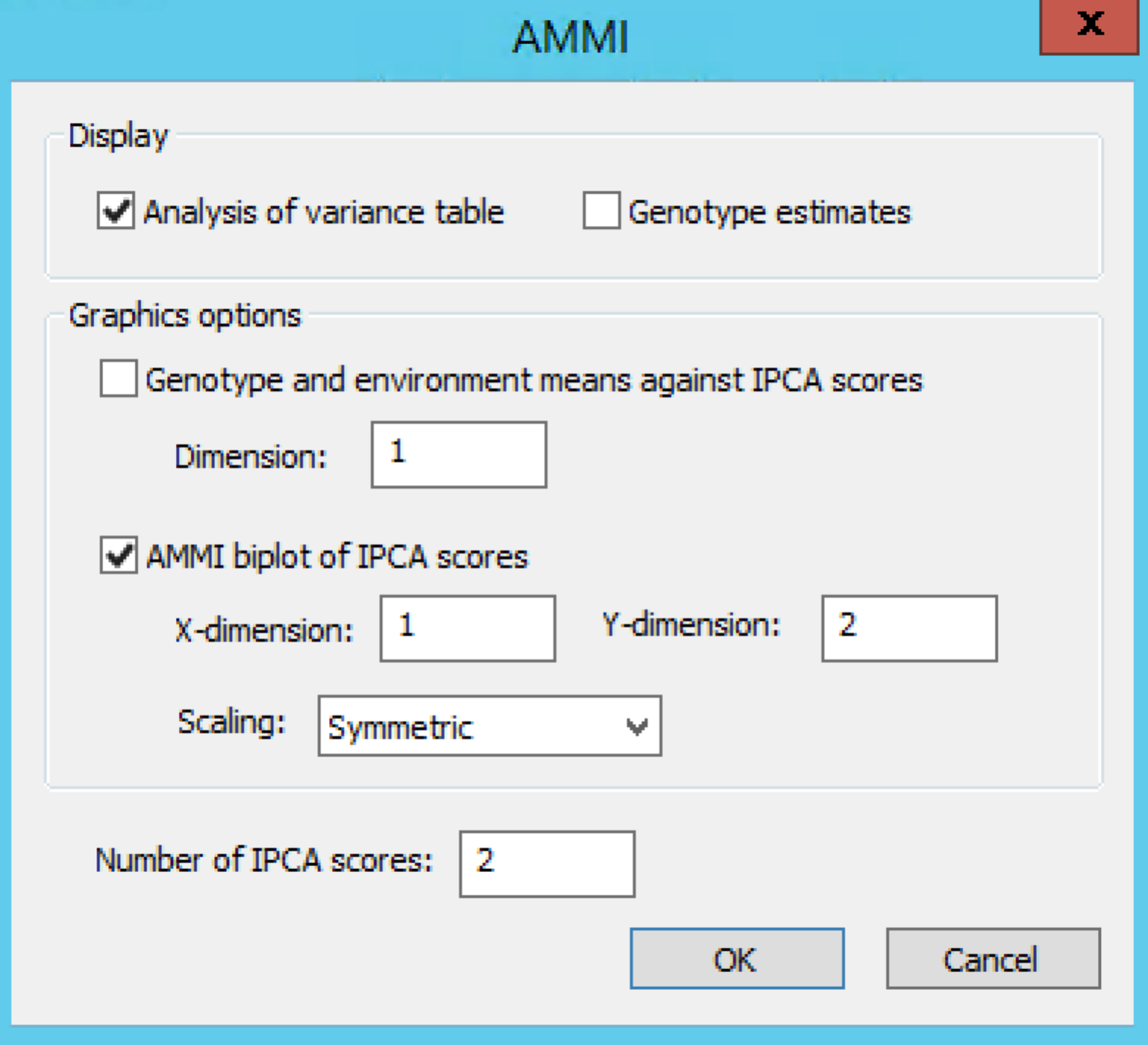 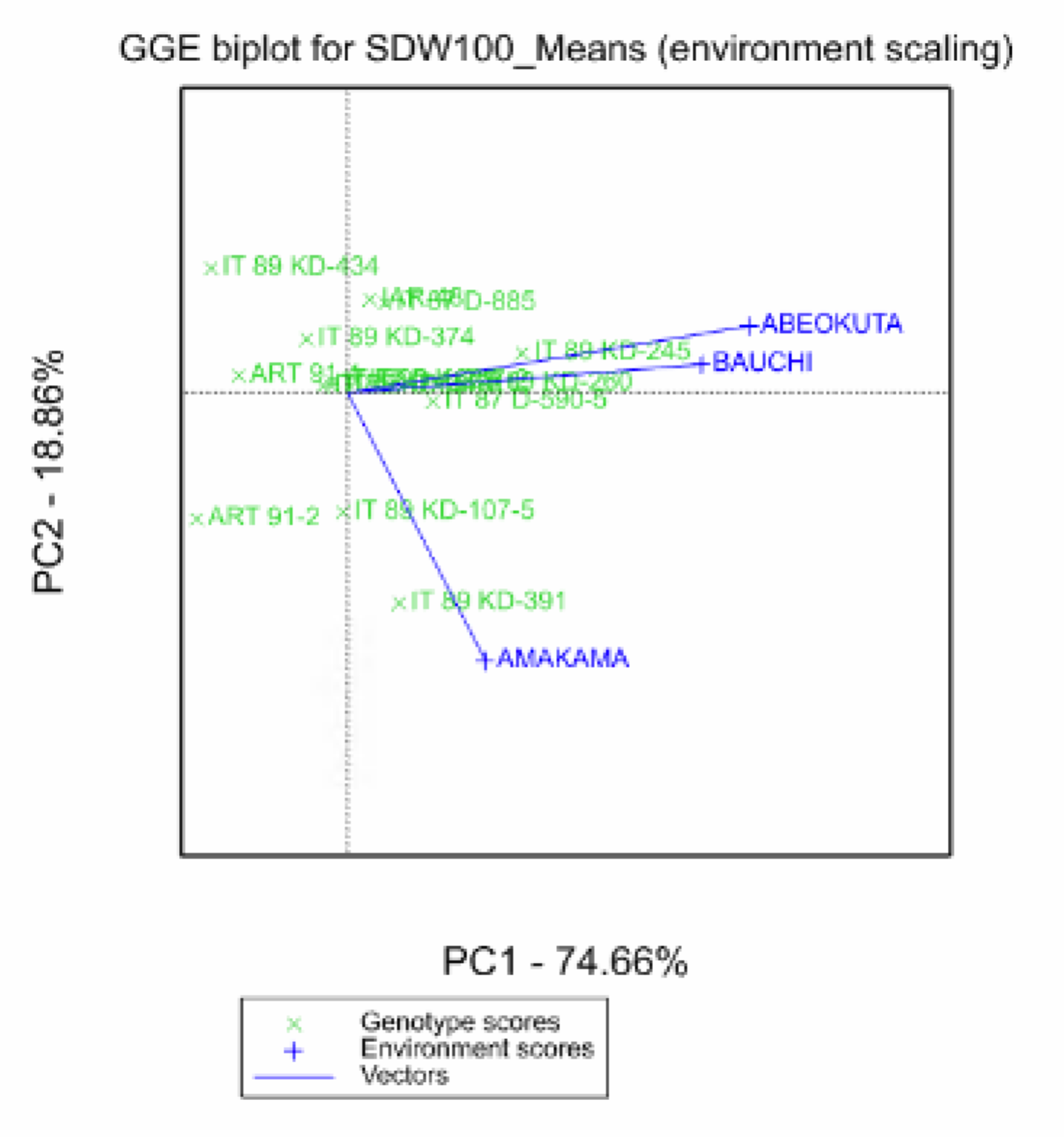 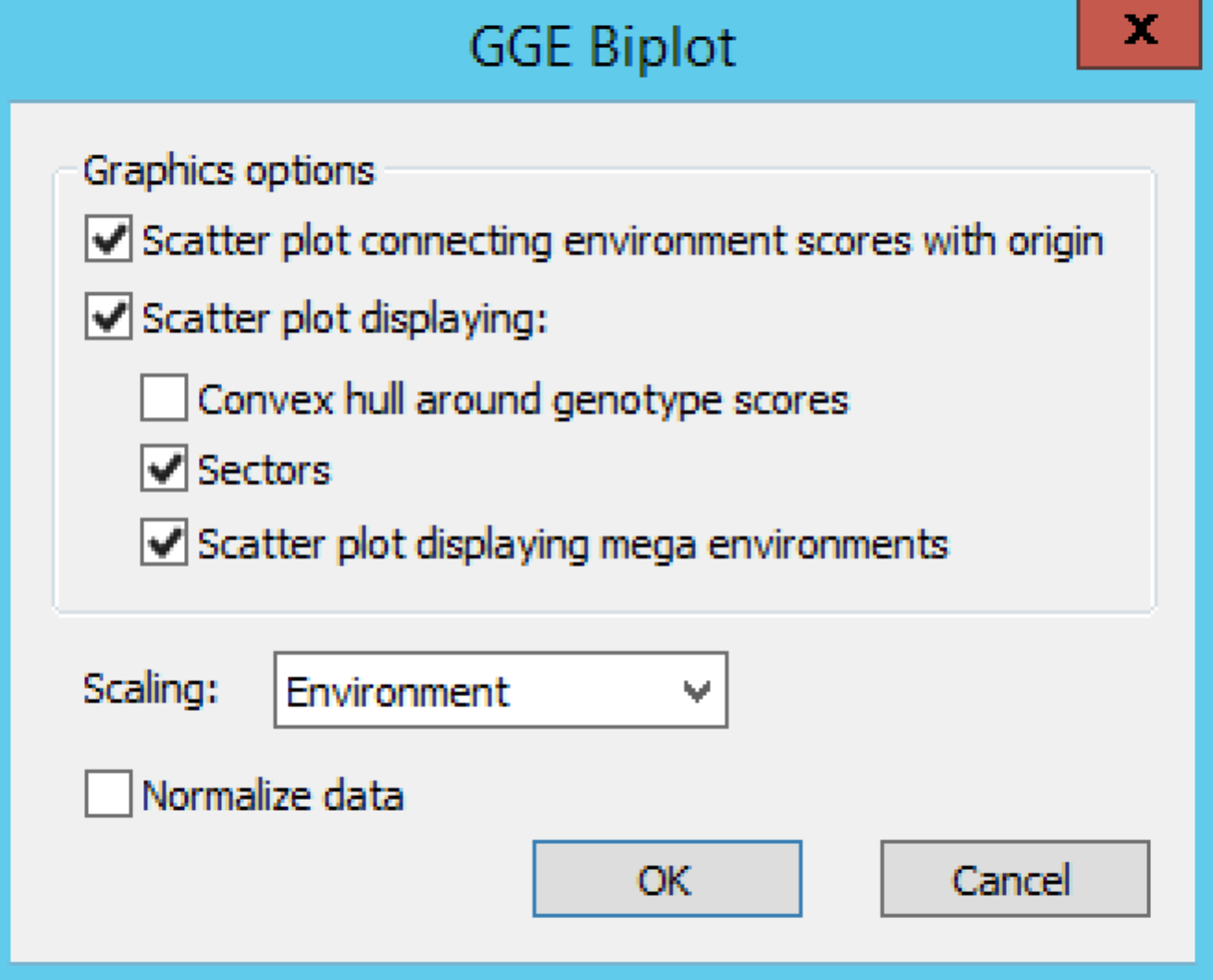 Stability coefficient measures for the genotypes: 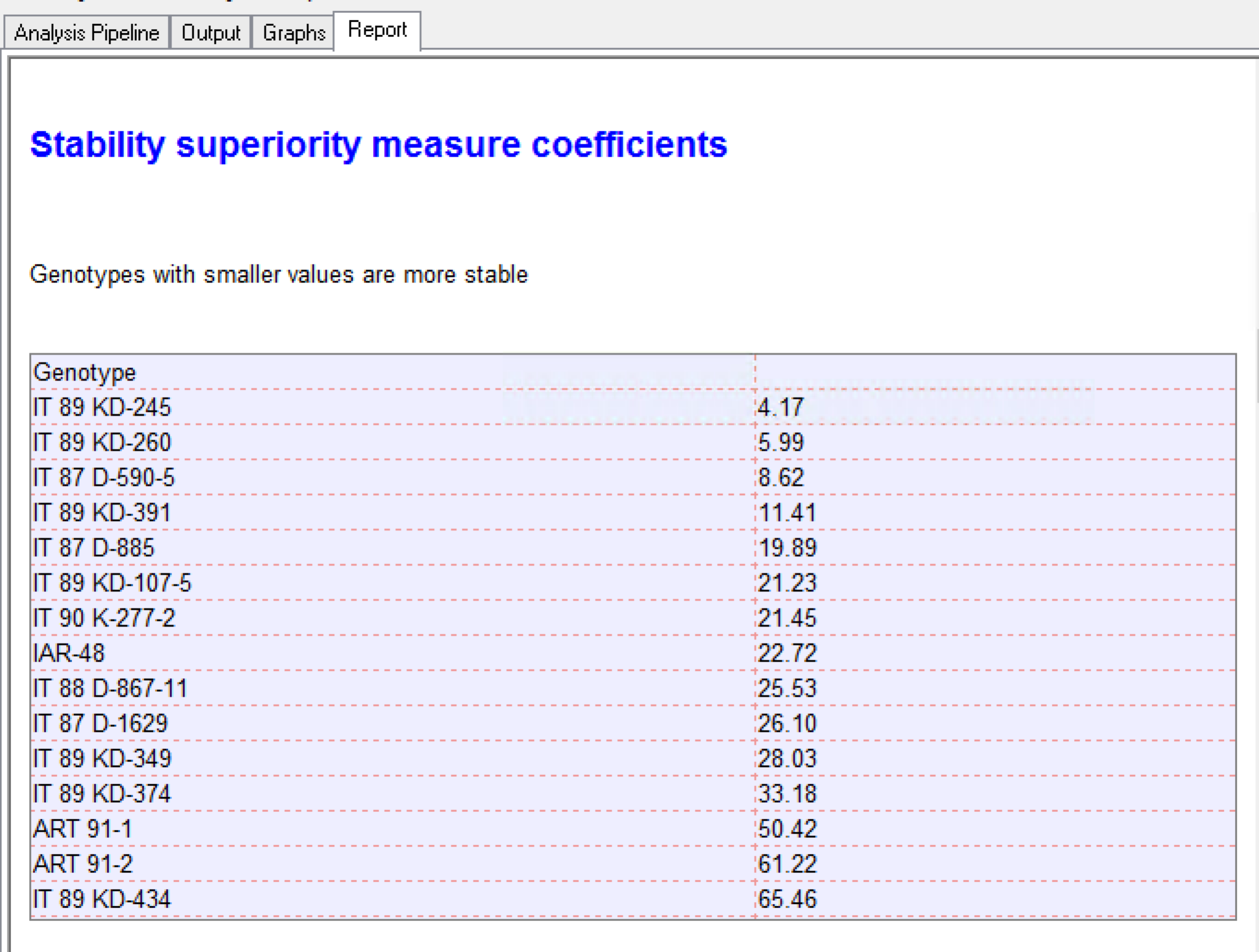 ?The most stable genotype identified by the Cultivar-Superiority Measure is IT 89-KD-245. 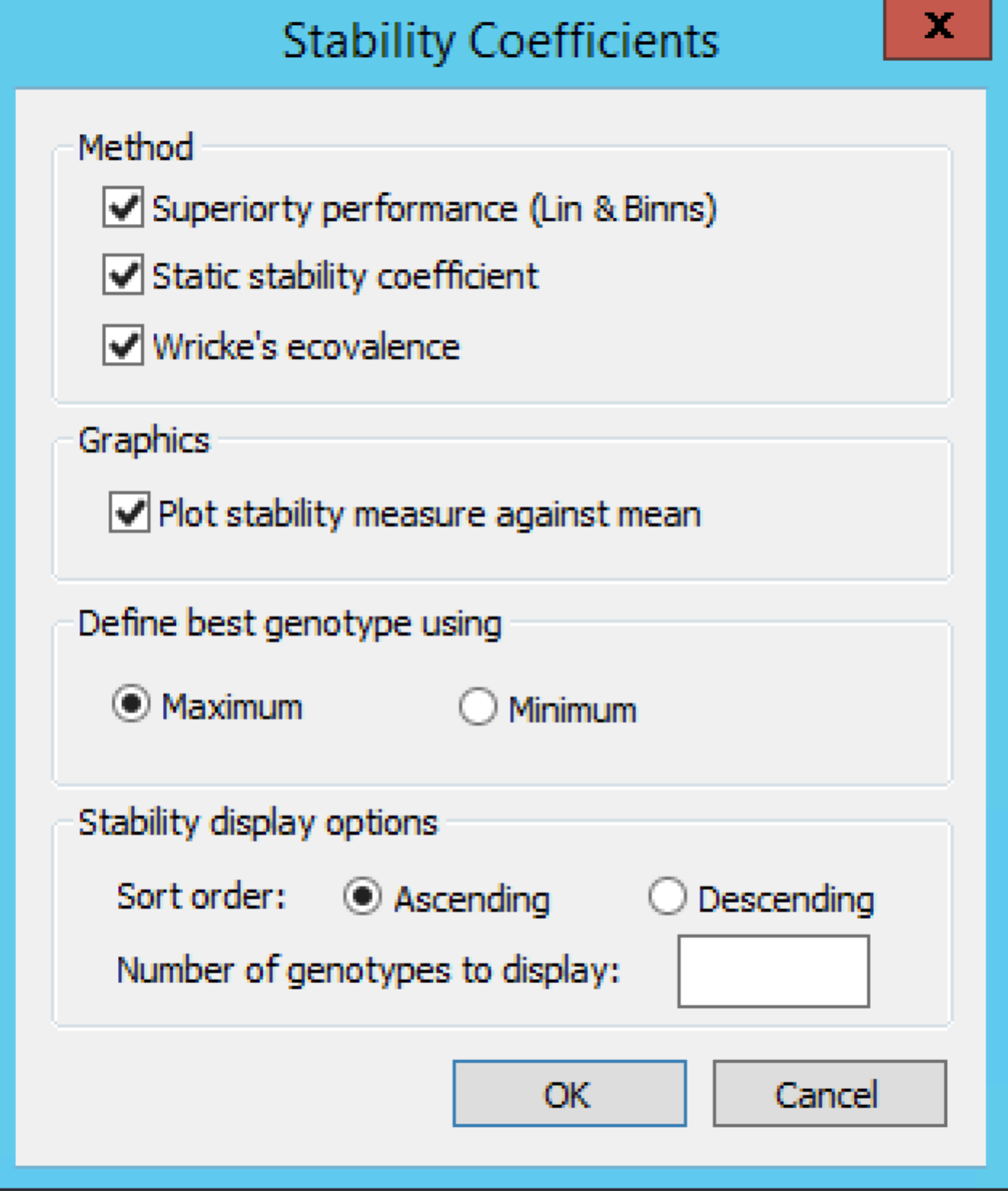 When Breeding View is run, the data files are automatically saved to your computer in the Workspace folder.

The Integrated Breeding Platform (IBP) is jointly funded by: the Bill and Melinda Gates Foundation, the European Commission, United Kingdom's Department for International Development, CGIAR, the Swiss Agency for Development and Cooperation, and the CGIAR Fund Council. Coordinated by the Generation Challenge Program the Integrated Breeding Platform represents a diverse group of partners; including CGIAR Centers, national agricultural research institutes, and universities.

The statistical algorithms in the Breeding View were developed by VSN International Ltd in collaboration with the Biometris group at University of Wageningen. Cowpea ?demonstration data was provided by Jeff Ehlers, Tim Close, Philip Roberts, Bao Lam Huyuh at the University of California Riverside and Issa Drabo at the Institut de l'Environnement et de Recherches Agricoles in Burkina Faso. These data may have been adapted for training purposes. Any misrepresentation of the raw breeding data is the solely the responsibility of the IBP.

This work is licensed under a Creative Commons Attribution-ShareAlike 4.0 International License.?