These instructions describes a genotype by environment (GxE) analysis for a four location maize field trial. This tutorial builds upon the adjusted means (BLUEs) and summary statistics calculated for the individual locations (Single Site Analysis ).

Traits with means available from all trial locations are selected by default. Traits that are not observed or could not be fitted with a mixed model in more than one environment in the single site analysis are not selected for Multi-Site analysis. 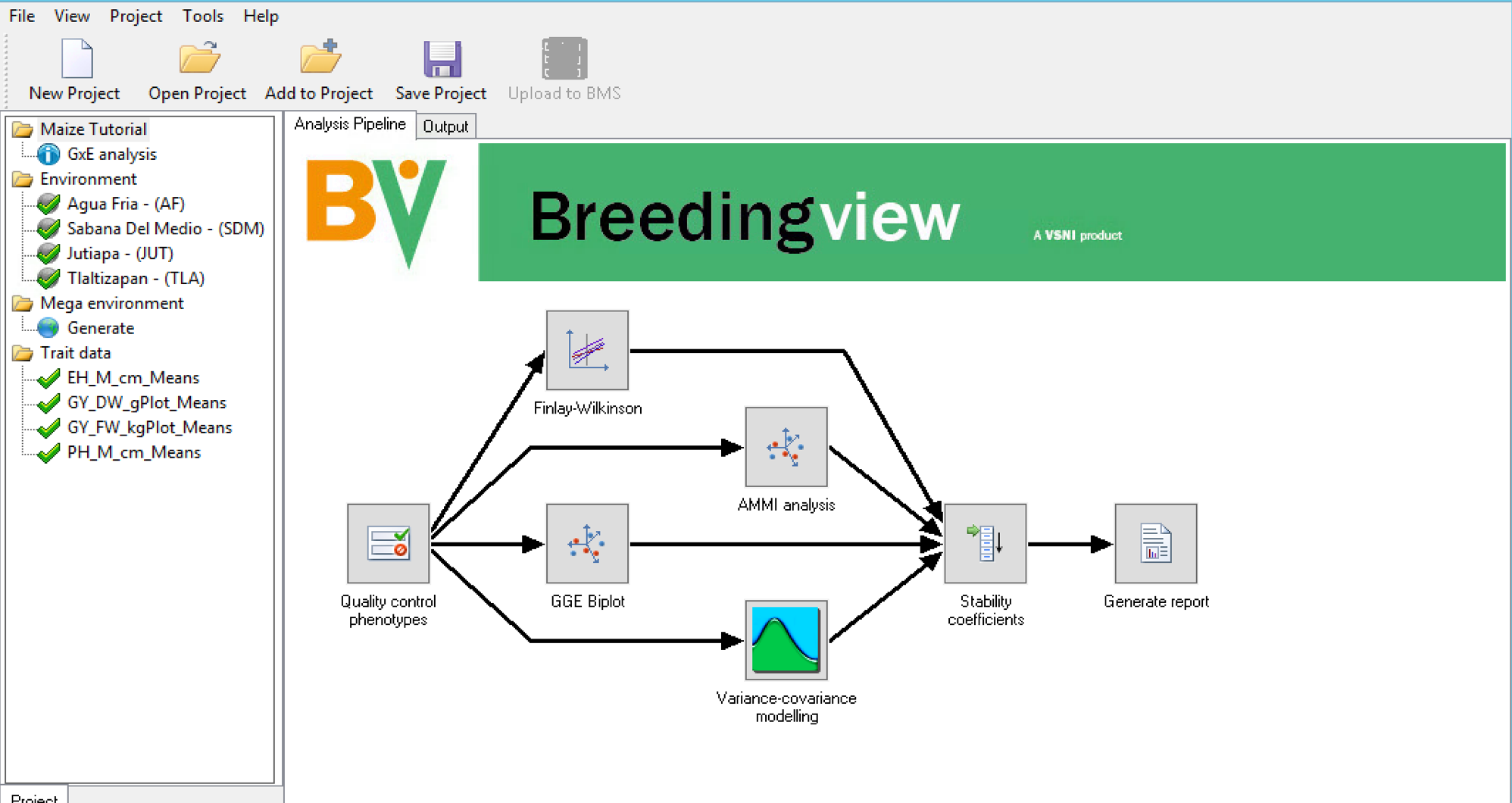 When a project has been created or opened, a visual representation of the analytical pipeline is displayed in the Analysis Pipeline tab. The analysis pipeline includes a set of connected nodes, which can be used to run and configure pipelines.

When the analysis is complete a popup notifies the user.

The analysis output can be viewed from Breeding View interface under the results and graphs tabs. Analysis results can also be reviewed as individual files are automatically saved in the location specified by your browser settings, generally the Downloads folder..

Breeding View provides descriptive statistics that describe the variance and covariance of the entire dataset.

The trait summary statistics describe each trait based on the means calculated for each environment in the single site analysis.

The box plot of means provides a visual representation of the summary statistics.

Best Variance-Covariance Model for Each Trait

The GxE analysis pipeline formally models the variance-covariance structure in the means data and selects the best model for each trait. The main purpose is to establish a model for later testing of fixed effects, like determining marker effects in a quantitative trait loci by environment (QTLxE) analysis using BLUPs calculated in the single site analysis.

Best Variance-Covariance Model: In this example, grain yield means are best described by an unstructured model, where each variance and covariance is estimated uniquely from the data.?

Stability, or lack of phenotypic plasticity, is calculated for each genotype considering all traits using the following analyses:

GxE interactions are also examined for each individual trait using the following analyses: 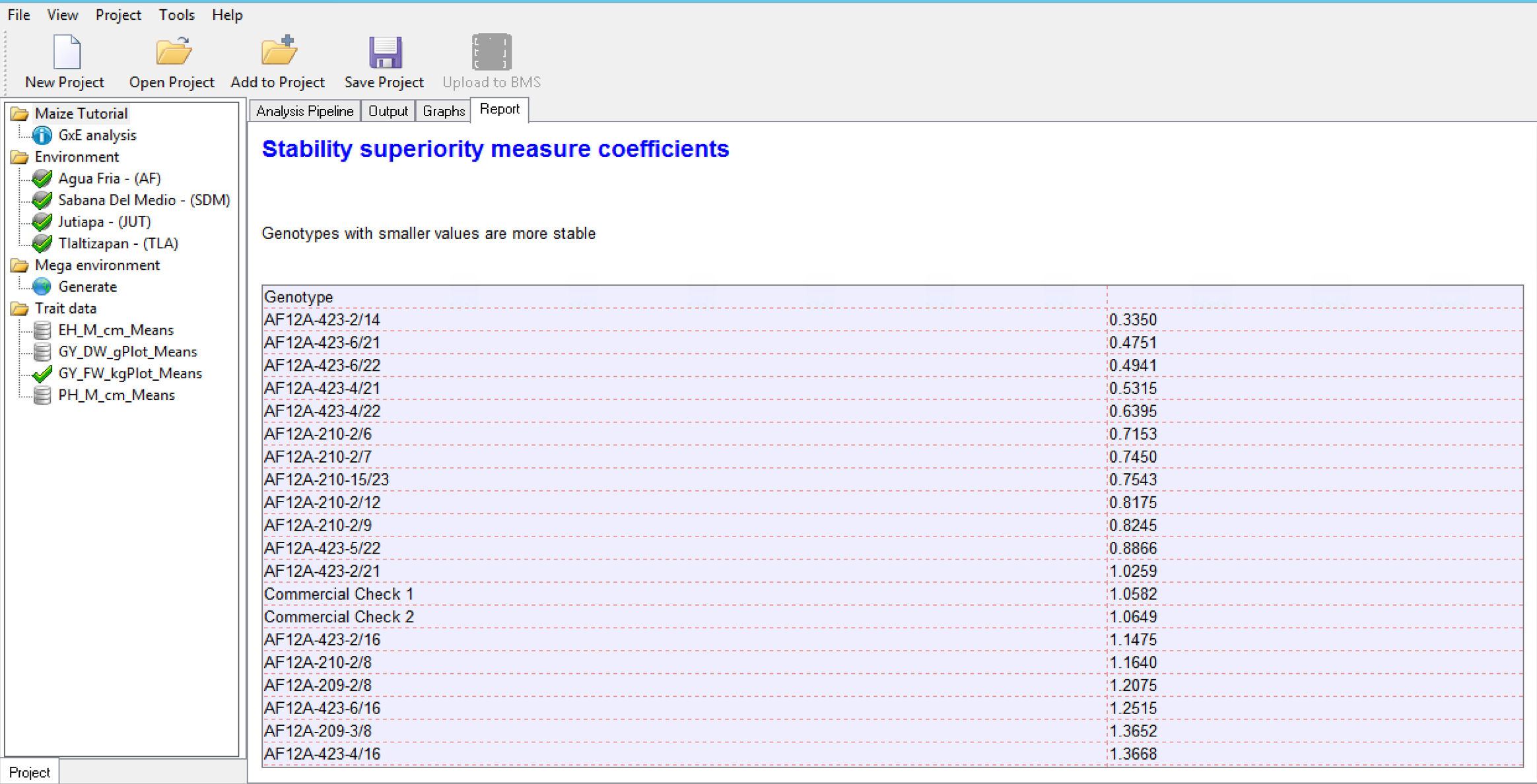 The Static Stability Coefficient is defined as the variance around the germplasm’s phenotypic mean across all environments. This provides a measure of the consistency of the genotype, without accounting for performance. 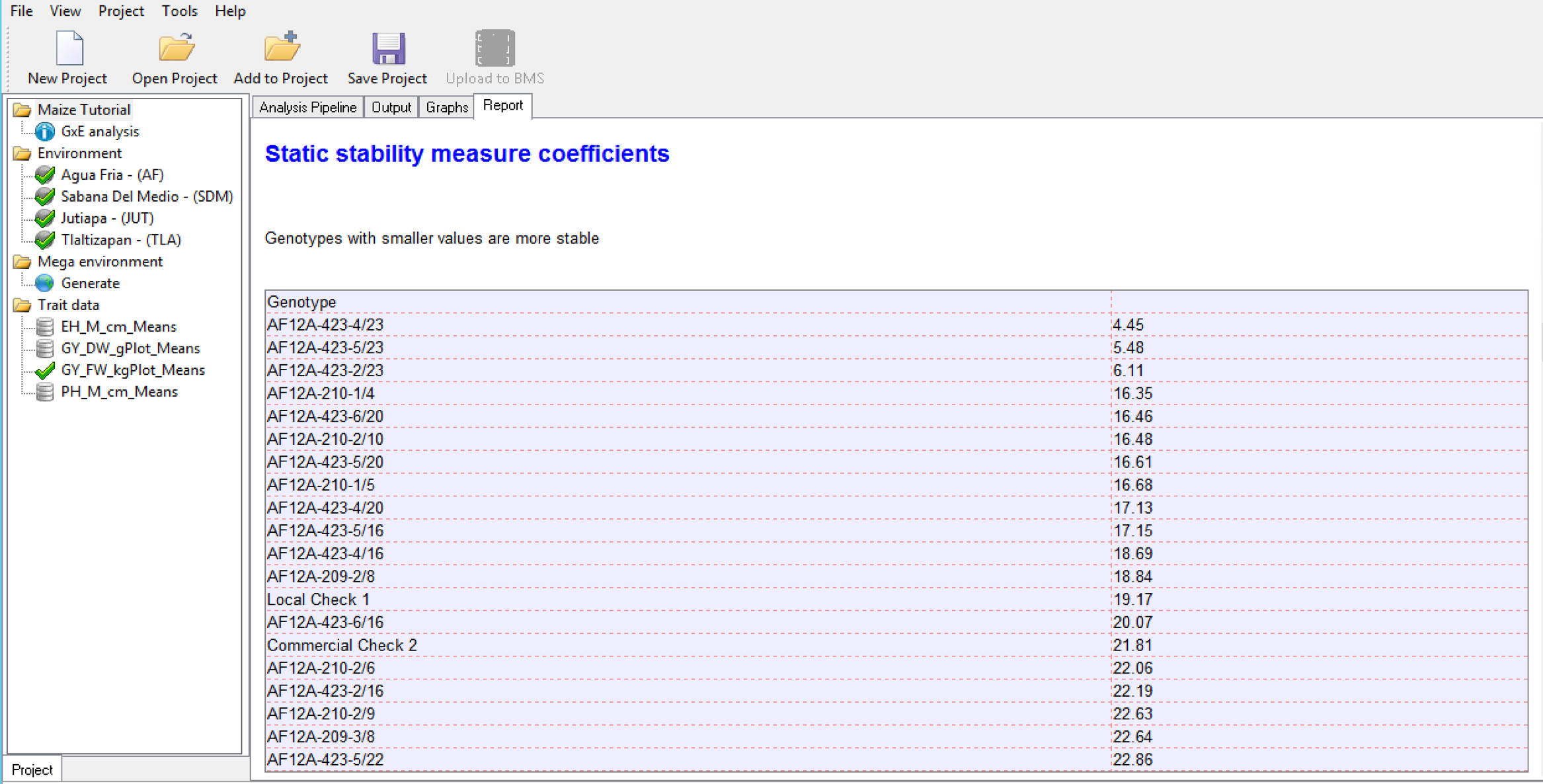 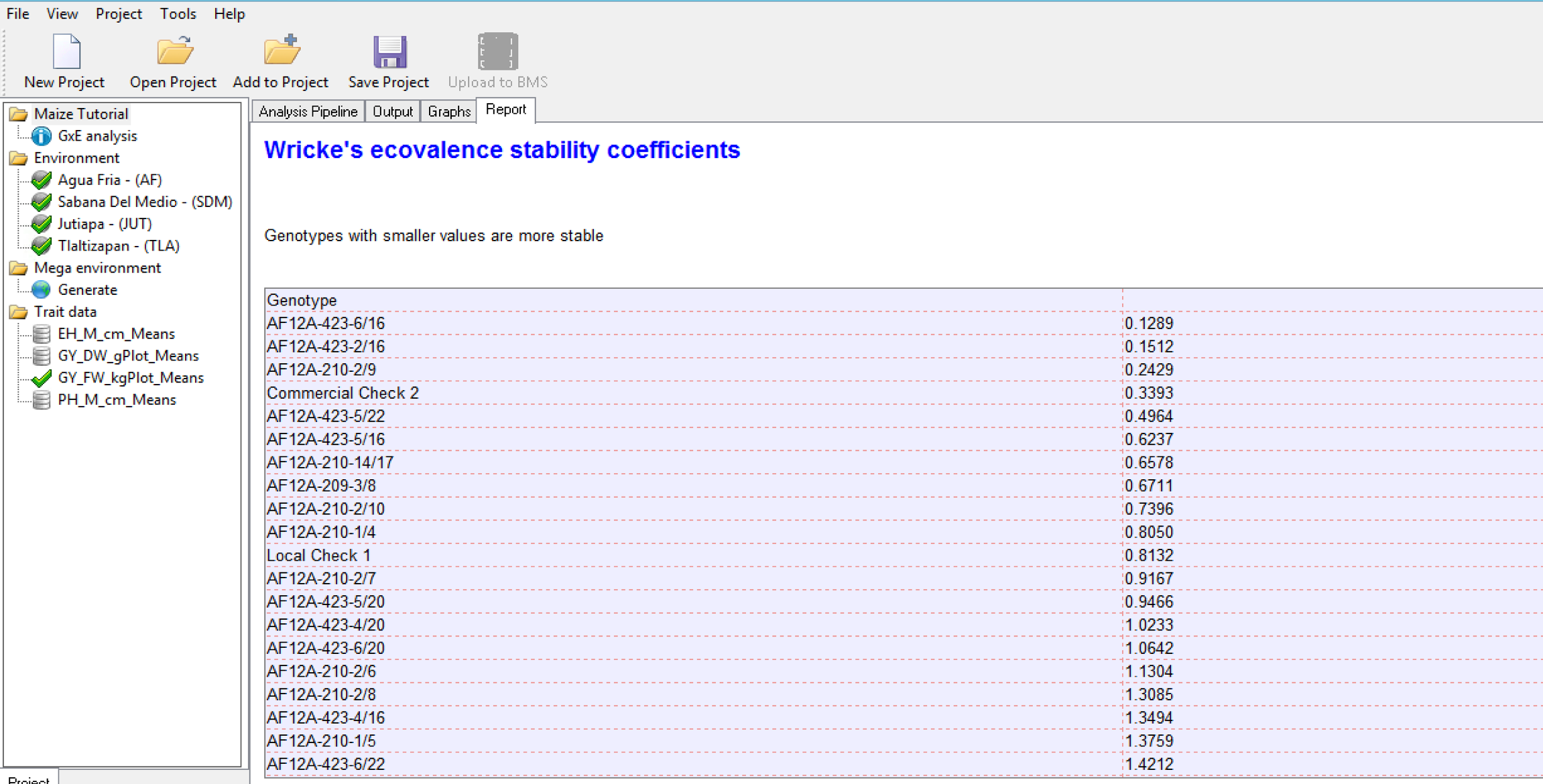 The Finlay and Wilkinson Modified Joint Regression Analysis ranks germplasm based on phenotypic stability for each individual trait. 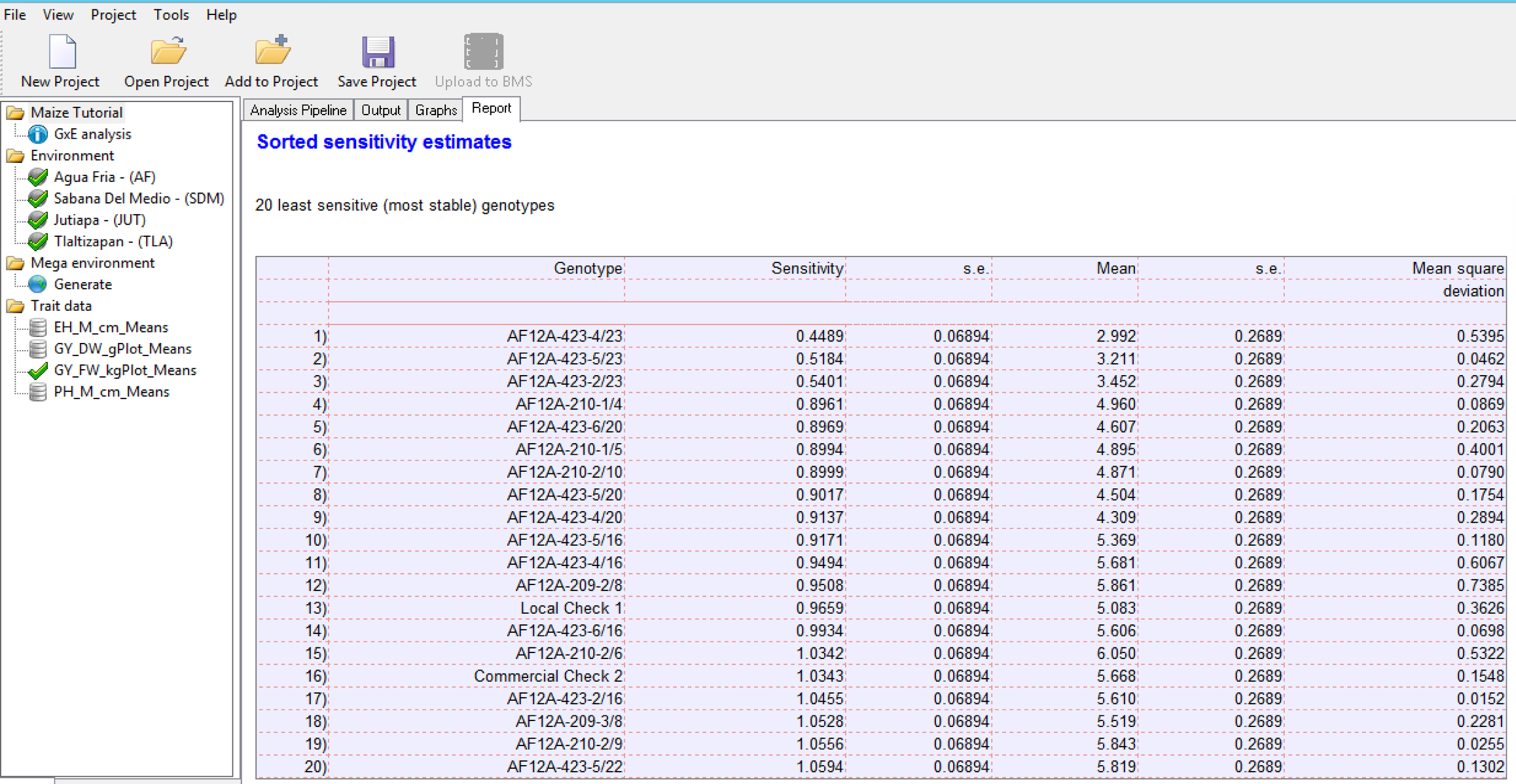 In the Additive Main Effects and Multiplicative Interaction (AMMI) model, a two-way ANOVA additive model is performed (additive main effects), followed by a principal component analysis on the residuals (multiplicative interaction). As a result, the interaction is characterized by Interaction Principal Components (IPCA), where genotypes and environments can be simultaneously plotted in biplots. 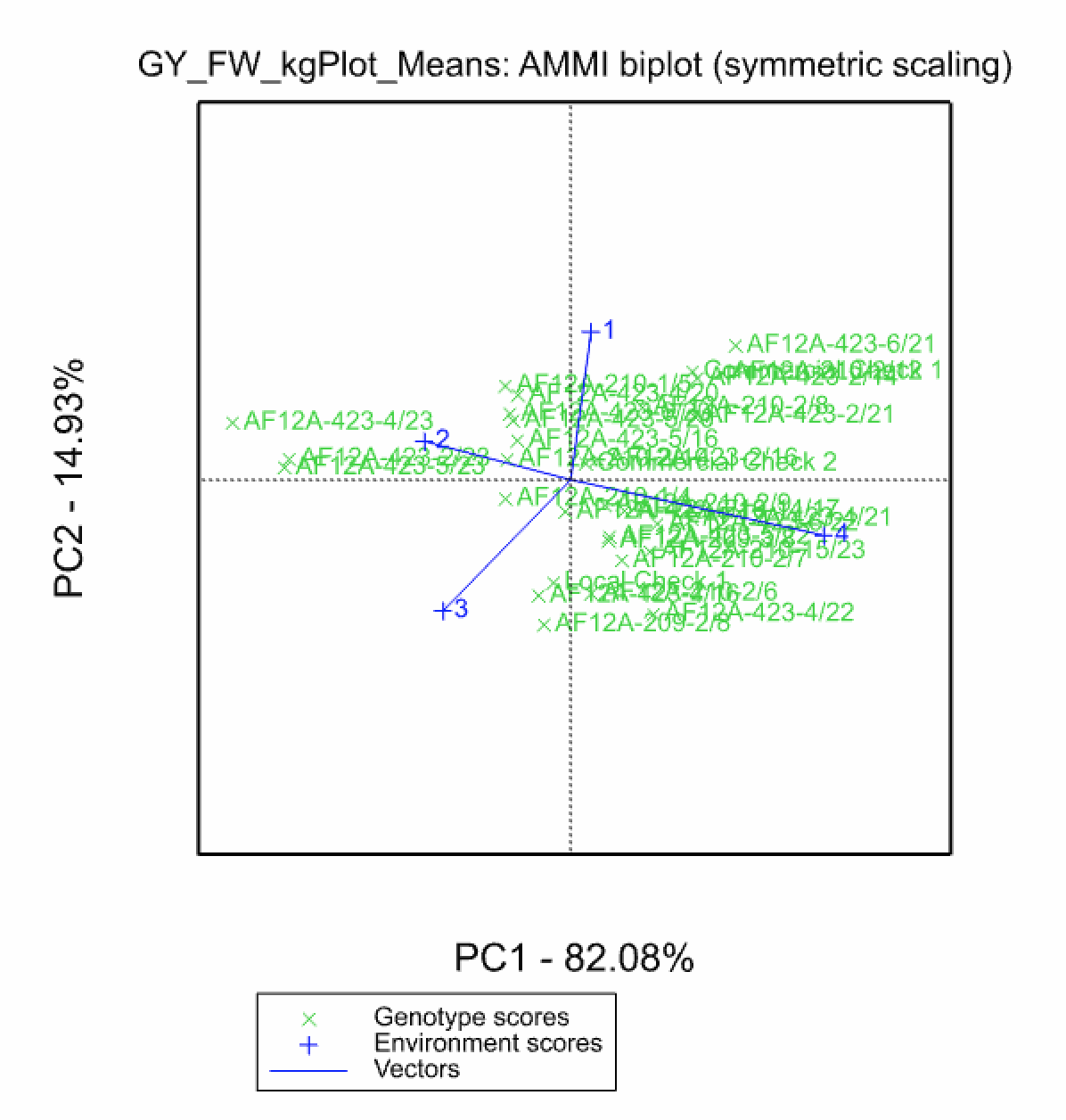 In the Genotype Main Effects and Genotype × Environment Interaction Effects (GGE) model (Yan et al. 2000 & 2003) a 1-way ANOVA, including environment as a main effect, is run followed by a principal component analysis on the residuals. Like AMMI, principal component scores can be used to construct biplots. Unlike the AMMI Model, in GGE the genotypic main effects are also represented in the plot. The GGE model is superior to AMMI analysis at differentiating mega-environments (Yan et al. 2007) 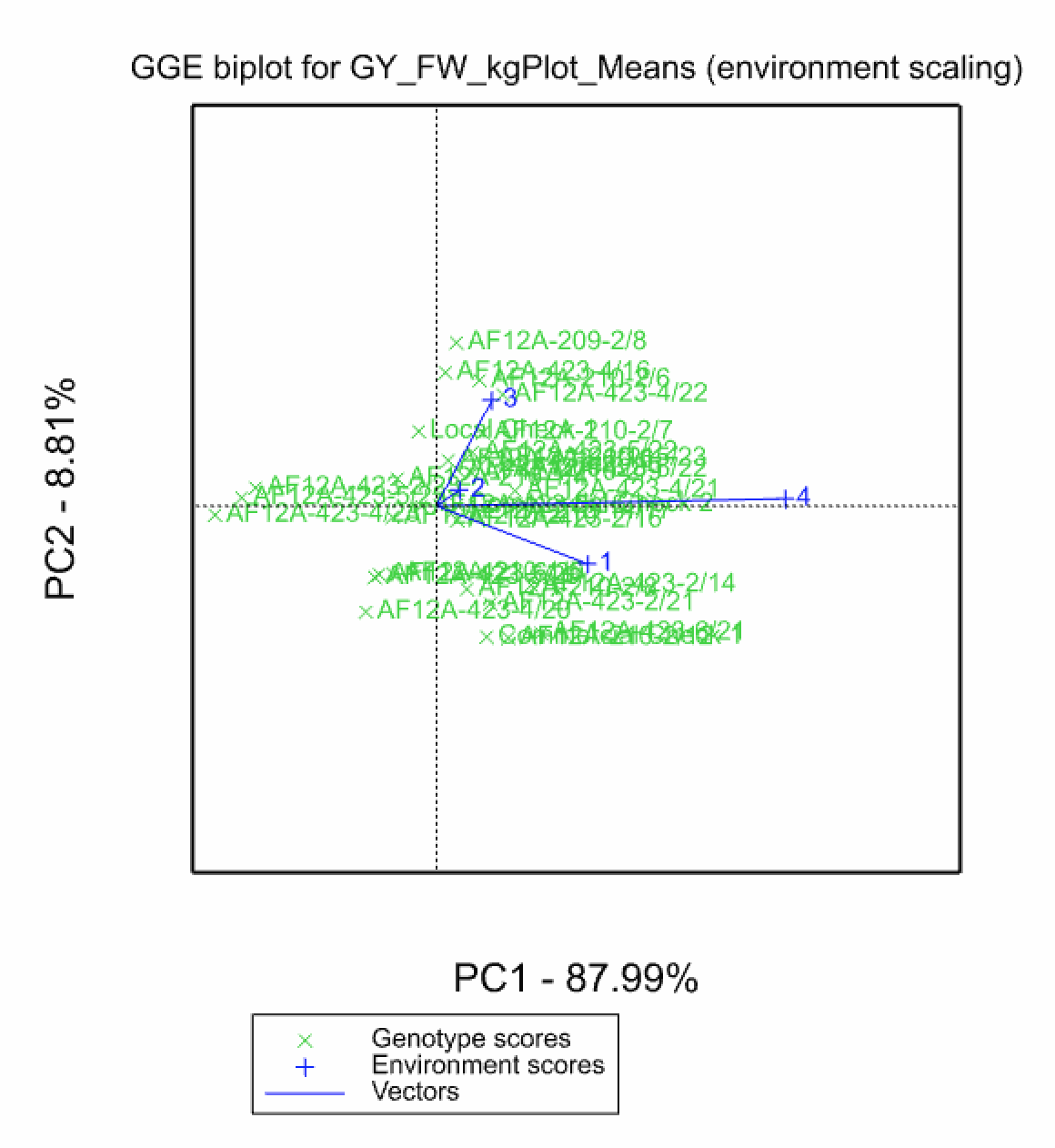 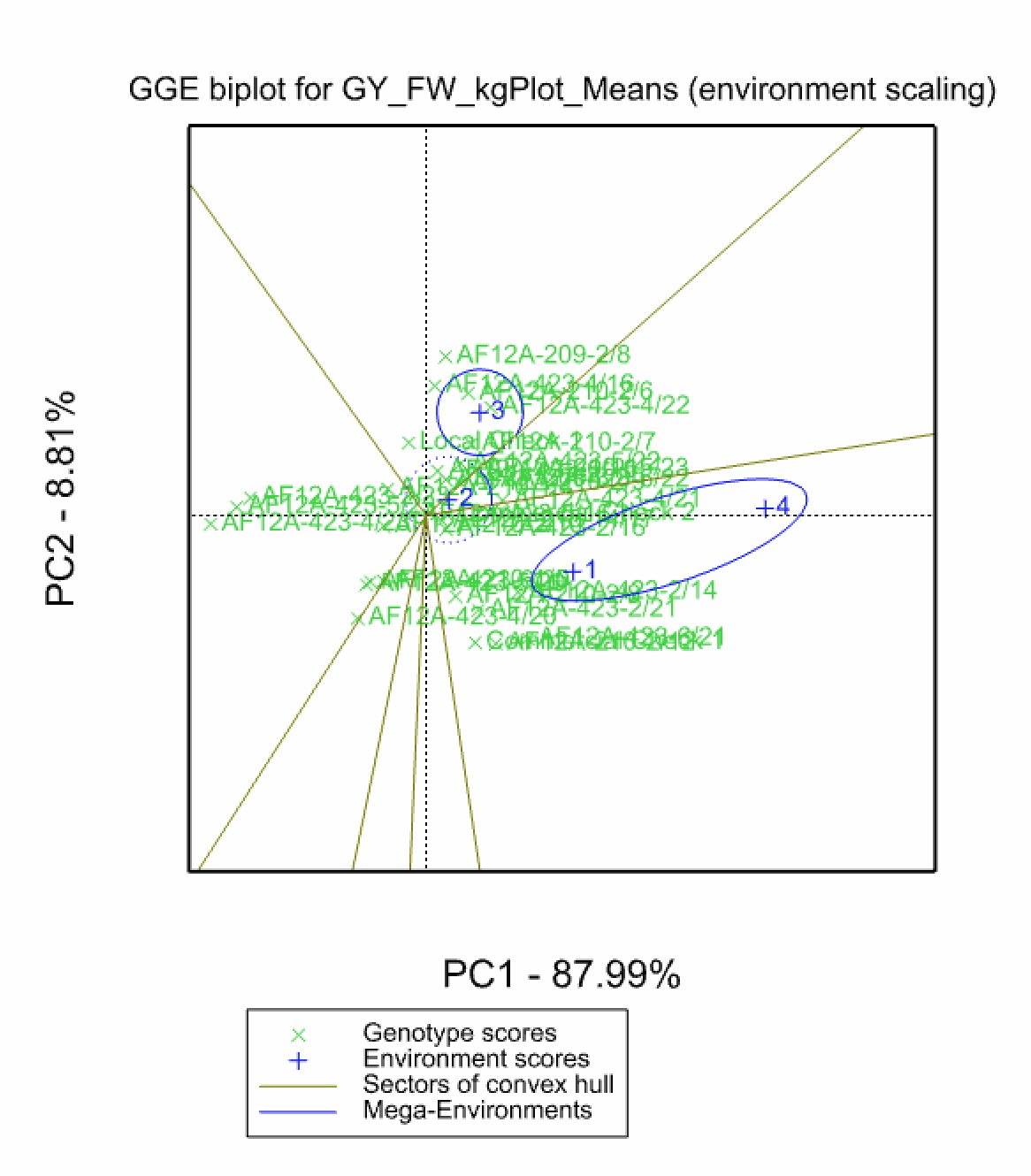 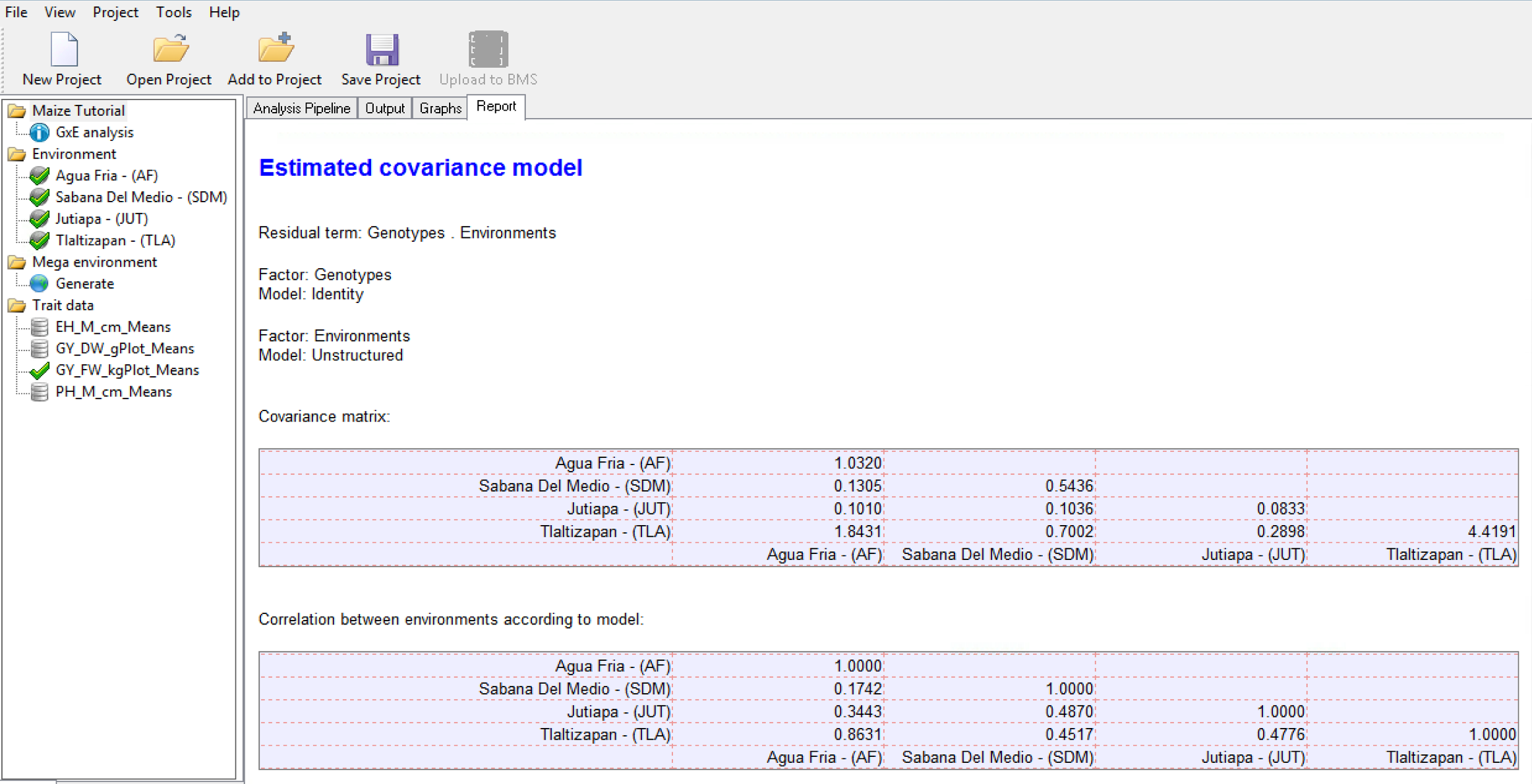 Correlation Matrix for Grain Yield (GY_FW_kgPlot): Environment 1 is most positively correlated to the Environment 4 (0.8631), suggesting that the two locations have similar environmental effects on phenotype.

The scatter plot matrix illustrates the association of genotypic performance between each pair of environments.